Directed by Ilana Trachtman
An emotionally rich documentary about the bar mitzvah of a spiritually vibrant 13-year-old boy with Down Syndrome.

In Putting God on the Guest List: How to Reclaim the Spiritual Meaning of Your Child's Bar or Bat Mitzvah, Rabbi Jeffrey Salkin writes:

"There is a River of Tears at every bar or bat mitzvah ceremony. By definition, tears are salty. This River of Tears is sweet. This river flows with the tears of parents who have head their children read from Torah. It is a very powerful river, for it is a very ancient river. It is a river that began in ancient Israel, and then flowed to Babylonia, and then to Spain and France and Germany and Poland and the United States and South Africa and Israel and Argentina. It is a river that flows from generation to generation. It is a river that flows wherever Jews have lived and worshipped. It gets mightier and sweeter with every passing Shabbat."

Your tears will flow freely in this emotionally rich documentary by Ilana Trachtman about the pivotal importance of this Jewish ritual in the life of a boy with Down Syndrome and the loving community that supports him every step of the way as he prepares for the day and the ritual. The film begins with a home movie of Lior (the name means "my light") with his mother, Rabbi Devorah Bartnoff, singing to him and rocking him in her arms. She died of breast cancer in 1997 and so was not there for his bar mitzvah as she wished with all her heart. Lior's father, Mordecai Liebling, a nationally known rabbi and former director of the Jewish Reconstructionist Federation, does his best to prepare his son for this ritual which signifies his rite of passage. Also helping out is the boy's stepmother, Lynne Iser.

Lior is given great moral support and large doses of love by his brother and older sister. Another sister, Anna confesses that all the attention of the household, is focused on Lior. In his Hebrew school, the other boys try not to exclude him and, for the most part, respect that he is different from them. Lior has a spunky sense of humor and is constantly playing little April Fool's jokes on people. But what he loves most is "davening" (prayer). He believes that God is happy when we commune with Him and so he prays in his room, in the backyard, and in the synagogue of Congregation Mishkan Shalom. Members of this community are amazed by Lior's connection with God. Several of them state that he is a spiritual genius who lights up the room with his joy and enthusiasm for prayer.

Praying with Lior was filmed over three years and zeroes in on the months leading up to his bar mitzvah in 2004. Trachman and her crew have done a marvelous job capturing and conveying the circle of love which encompasses this boy with Down Syndrome. The gifts he gives to those who reach out to him are the virtues which everyone can salute and celebrate. The climactic bar mitzvah service with 300 people in attendance will bring tears to your eyes and confirm what spiritual people of all traditions have long known: ritual rouses us, embracing and delivering a rich repository of meaning in tradition and community. The river of tears that flows from family and friends reflects the light emanating from Lior's soul. Best of all, he finds the perfect way to re-connect with his deceased mother on the biggest and brightest day of his life. 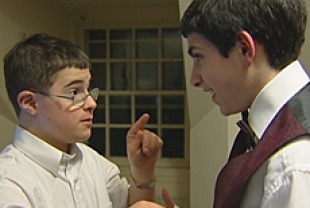 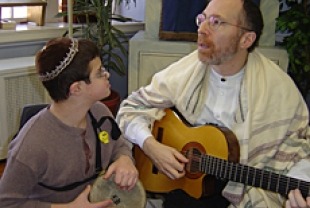 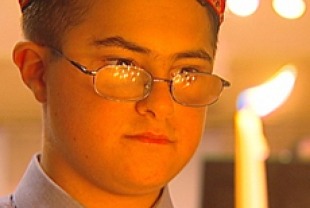