10 Questions for the Dalai Lama

Directed by Rick Ray
A fascinating portrait of the 14th Dalai Lama and an interview with him.

Cinematographer, writer, and director Rick Ray has produced 12 films about regions as diverse as Ethiopia, Iceland, and Bali. While traveling in India, he followed the advice of a cab driver and e-mailed a request to the Dalai Lama for an interview. This unusual documentary charts Ray's private visit to a monastery in Dharamsala and includes archival footage of the Dalai Lama's youth, the Chinese takeover of Tibet, and his life in exile in India. There is also rare footage of the changes in Tibet under Communist rule. Ray teaches filmmaking at Brooks Institute in Ventura, California, and observing that most of his students know very little about Tibet or the Dalai Lama, he says, "I made this film for the younger generation."

Ray provides a fascinating mix of material on the 14th Dalai Lama, who describes himself as "a simple monk from a peasant family." He is also a winner of the 1989 Nobel Peace Prize and has been called "the rock star of peace." In his travels around the world, people who meet him talk of being amazed by his humility, his broad knowledge of science, his informality, and his infectious laugh and mischievous sense of humor. The Dalai Lama identifies with the poor and the dispossessed people in the world because he, too, is a refugee. This spiritual leader is also a great advocate of religious tolerance and mutual cooperation.

Ray ends 10 Questions for the Dalai Lama with an interview with the spiritual leader of Tibet. Among the subjects this peacemaker discusses is the contentment that comes from a simple life of limits; the need to take better care of the environment; the importance of birth control; the power of negative emotions, such as frustration, anger and hatred; the significance of self-discipline; and the value of peace and the folly of war.

Here are two quotations from the interview:

• "Everything is interdependent. Everything is interconnected. So my interest is very much linked to everyone's interests. Our survival and our future are very much linked to one another. Therefore the destruction of your so-called enemy is actually the destruction of your self. The concept of war — 'destroy your enemy' — is old-fashioned. It is out of date." 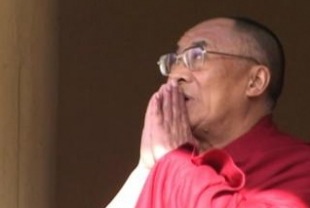