Directed by Stuart Townsend
Three cheers for this prophetic political film about activists willing to take a stand against rich and powerful multinational corporations!

Three cheers for Battle in Seattle, a prophetic political film about activists who are willing to take a stand and even go to jail to protest the World Trade Organization's contributions to global warming, sweatshop labor, and special deals to multinational conglomerates and rich countries! Written and directed by Stuart Townsend, this fictionalized drama about the 1999 WTO ministerial conference held in Seattle uses archival news footage along with an impressive mix of stories about various participants in the tension-filled five-day event.

Jay (Martin Henderson) and his friend Django (Andre Benjamin) have spent months organizing a carefully orchestrated peaceful protest against the WTO during its closed-door meetings in Seattle. In the opening scene, Jay and Lou (Michelle Rodriguez) dangle from a crane high above the streets as they unfurl an anti-WTO banner. It is only the first of many dangers they will face together.

Mayor Jim Tobin (Ray Liotta) wants things to run smoothly in his city, and he is adamant that the protesters' right to free speech and their peaceful demonstrations be respected. However, the police are stunned and overwhelmed when the protesters close down access to the convention hall and force the WTO to postpone the opening meetings.

Things go from bad to worse for the Mayor when anarchists ignore the pleas of Jay and other activists to keep the demonstrations peaceful: they smash windows and torch a few businesses in the downtown area. The media exaggerates this disturbance by characterizing it as a "city descending into chaos." Jean (Connie Nielsen), a TV reporter, and Dale (Woody Harrelson), a cop with a pregnant wife (Charlize Theron), find their lives transformed by the happenings on the streets. Meanwhile, Dr. Maric (Rade Sherbedzija), a delegate trying to focus the attention of the WTO on the African AIDS epidemic, is shocked to see the brutality of the police in riot gear using tear gas, pepper spray, and clubs against the peaceful demonstrators. Eventually, the White House and the governor force the Major to call in the National Guard to set up a curfew.

Battle in Seattle comes across as a thought-provoking drama about the struggle of a movement to be heard. The protesters are convinced that globalization is just another tool used by rich and powerful corporations and governments to oppress the poor and advance their own profits.

Special DVD features include "Behind the Scenes: The Making of Battle in Seattle"; a commentary with director Stuart Townsend; and interviews: "The Real World Trade Leaders." 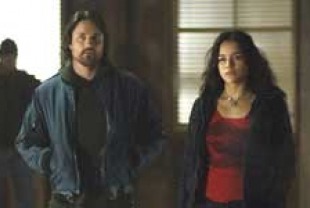 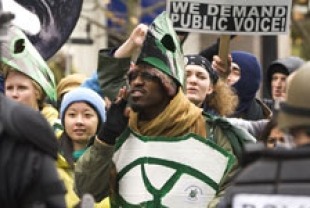 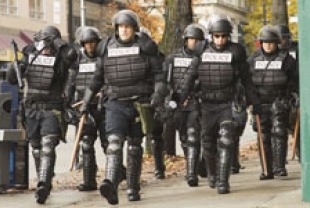