Directed by Steven Soderbergh
A complex portrait of Che as a revolutionary, a guerilla leader, a doctor, a believer in loyalty, and a man willing to suffer for his beliefs.

Steven Soderbergh's two-part cinematic portrait of Che fits nicely with Walter Salles's 2004 The Motorcycle Diaries, a bioflick about the young Che on a road trip throughout South America where he realized his deep solidarity with the poor and the oppressed. Che still remains a compelling figure in the world pantheon of revolutionary figures. Soderbergh presents a detailed look at his life and death in two films which add up to four hours and eighteen minutes. Certainly this demands the patience and attentiveness which comes hard to the younger generation used to fast-paced action films with simplistic superheroes.

In "The Argentine," we are treated to a multidimensional look at Ernesto Guevara (Benicio del Toro). Hopping from one year to another, it mixes documentary footage with various vignettes of his life and segments from his diary. Included are interviews and a speech delivered at the United Nations. Most telling is his meeting with Sen. Eugene McCarthy where he thanks him for the Bay of Pigs operation which helped the cause of the revolution in Cuba. There are flashbacks to Che's initial meeting with Fidel Castro (Demian Bichir) and their determination to overthrow the corrupt president Gen. Fulgencio Batista who was supported by the United States. Che turns out to be a capable guerilla leader and proves his mettle in a key battle at Santa Clara.

In the second film "Guerrilla," Che is sent by Castro to Bolivia with the mission of spreading Marxism-Leninism. This country's president (Joaquim de Almedia) calls for assistance from the United States to confront the spread of Communism. The Bolivian forces benefit from the help of American equipment and advisers. Worn down by a bad case of asthma, Che works with his band of guerillas trying to convince the peasants to join their cause. But it is an uphill task given the Bolivian distrust of outsiders in their country.

Soderbergh shows us many different sides of the revolutionary as a leader of men; as a doctor who heals not only his comrades but the poor in villages; as a disciplinarian who believes in the rigors of obedience and loyalty to the cause; as a lifelong learner who manages to read and write while existing in the jungle; and as a soldier whose passion for justice is fueled by confidence in armed resistance. The chilling finale reveals that violence only begets more violence in a never-ending cycle. 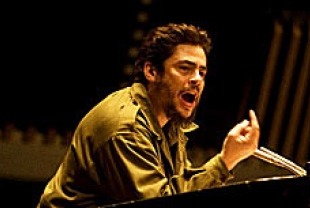 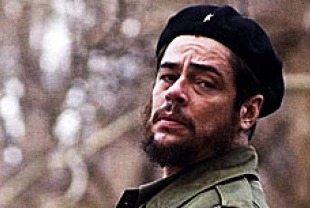