The Secret Life of Bees

Directed by Gina Prince-Bythewood
A remarkable and heart-affecting screen version of a deeply spiritual novel about the healing and transforming power of love.

Fourteen-year-old Lily Owens (Dakota Fanning) desperately wants to know more about her mother, who died in a gun accident when Lily was just four. Her embittered father (Paul Bettany) resents her questions and punishes her severely when he finds her out in their orchard. He doesn’t realize that the girl has buried treasures from her mother there, including a picture of a black Virgin Mary with "Tiburon, S.C." written on the back.

Lily is close to Rosaleen (Jennifer Hudson), their African-American housekeeper. On the day that she goes to register to vote, she is attacked by some racist men, beaten, and then arrested. At the hospital, Lily sneaks past the guard and helps Rosaleen escape. The two head off for the only place Lily knows to go — Tiburon.

Arriving there tired and hungry, Lily buys some food at a grocery store where she notices a honey jar label with the same black Madonna picture she has from her mother. The beekeepers, she learns, live nearby. They are the Boatwright sisters, August (Queen Latifah), June, (Alicia Keys), and May (Sophie Okonedo). Lily explains that she's on her way to her aunt's house but needs a place to stay for a while, a story that the sisters doubt. But without hesitation, these African-American women open their home to the white girl and her black friend. Lily wants to ask them if they knew her mother, but she decides to wait. She tells Rosaleen, however, that it feels like she is supposed to be there.

August begins showing Lily how to work with the bees. Another helper is Zachary (Tristan Wilds) , an African-American youth who wants to be a lawyer some day and help his people. Rosaleen works in the kitchen with May, an extremely sensitive soul who is carrying a lot of suffering in her heart. May retreats to a wailing wall in the woods whenever she learns about a painful situation. Meanwhile, June is being courted by Neil (Nate Parker), a persistent suitor who meets up with resistance from this feisty, independent woman.

The story is carried into our hearts by the exquisite and emotionally authentic performances by Dakota Fanning as Lily and Queen Latifah as August Boatright. In one of their best scenes together, the veteran bee-keeper gives Lily lessons in what she calls "bee etiquette." She tells her not to be afraid, not to swat, and to act like she knows what she's doing even if she doesn't. Best of all, Lily is told to send the bees love because every little thing wants to be loved. Lily bows to the beehives and says, "I love you, I love you." When this troubled teenager says later, "I can't think of something I'd rather have more than someone lovin' me," we know just what she means.

The Secret Life of Bees is directed by Gina Prince-Bythewood (Love & Basketball) based on the bestselling novel by Sue Monk Kidd. We are happy to report to the many fans of the book that its spiritual riches are intact. Sometimes the transition from book to screen results in a dumbing down of religious metaphors. But not this time.

The Boatwright sisters meet regularly at their house for prayers around a large statue of the Virgin Mary, a black Madonna. Lily is drawn to the Madonna, too, and the strong women around her who reflect aspects of her presence: August's strength and kindness, May's compassion for the suffering, and June's passion for life. In their presence Lily is finally able to deal with the truth about her mother.

Novelist Sue Monk Kidd has written about the significance of the Black Madonna to women and poor people throughout history. It is extremely moving to see the characters in this story come to the Madonna in the Boatwright living room with their personal feelings of pain, guilt, and suffering. As the women reach out and touch the Madonna's heart, we, too, can sense the balm of God's healing grace. The Secret Life of Bees is a remarkably heart-affecting screen version of the deeply spiritual novel about the healing and transforming power of love. 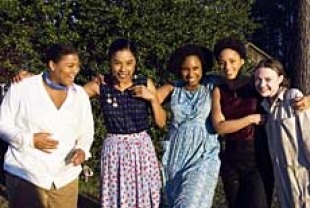 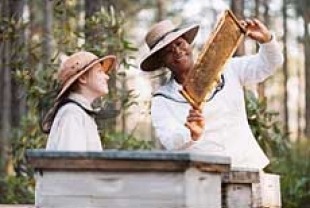 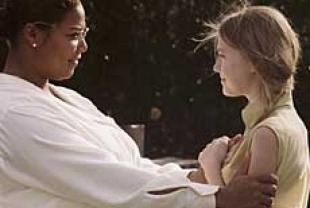