Directed by Ari Folman
A chilling Israeli animated documentary which revolves around the 1982 massacre of 3,000 unarmed Palestinian refugees in Lebanon.

In this disturbing animated documentary, Israeli filmmaker Ari Folman deals with the barbarity of war and Zionist complicity in the massacre of 3,000 unarmed Palestinian refugees (men, women and children) by Christian Phalangists during the invasion of Lebanon in 1982. The director begins with an interview with a friend who tells him about a recurring nightmare about being chased by a pack of 26 angry dogs. It turns out that this man was a soldier in Lebanon who was ordered to kill all the barking dogs in a village so that Palestinian terrorists would not be warned of the approach of the Israeli troops.

Folman is baffled why he can't remember much about his participation in the Lebanon war. "That's not stored in my system," he surmises. The director talks to a therapist about his lack of memory. He visits Carmi, an old friend who now lives in Holland. This soldier recalls shooting an old Mercedes with his comrades and discovering that the car contained a family of civilians. In a taxi, Folman begins to remember his own experiences in Lebanon. Another soldier recalls his escape from near death in a raid and his swimming in the sea to safety.

Folman was stationed around the Sabra and Shatila refugee camps after the assassination of the immensely popular Christian Phalangist leader Bashir Gemayel. Soldiers from this fascist militia were sent into the camps to locate Palestinian terrorists, but instead of focusing on those targets, they began to systematically murder all the men, women, and children. Folman and his comrades sent up flares to assist them. An Israeli television reporter observes that the sight of refugees with their hands above their heads brought to mind the image of Jews surrendering in the Warsaw ghetto.

Watching this searing animated documentary, we were reminded of those who stood by and did nothing to help the Jews when they were being sent to concentration camps to be killed. Folman makes it clear that Jewish soldiers did the same thing in the face of the slaughter of the Palestinian refugees. In the press notes for the film, we learn that Minister of Defense Ariel Sharon was found guilty in an official inquiry into the massacre for not having done enough to stop the massacre. He was dismissed from his duties and from serving as Minister of Defense for another term. Twenty years later he was appointed Prime Minister of Israel.

Special features on the DVD include a commentary with director Ari Folman; "Surreal Soldiers: making Waltz with Bashir"; a Q & A with Ari Folman; and building the scenes - animatics. 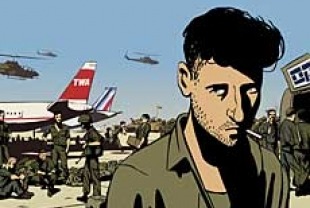 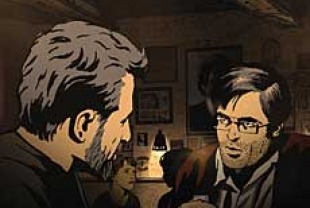 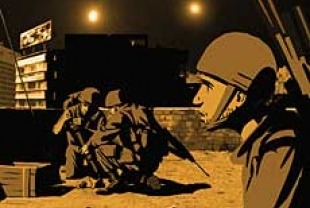