Directed by Jan Troell
An extraordinary film about a poor working-class mother of seven who keeps her soul alive through nurturing her talent as a photographer.

Jan Phillips, a photographer and spiritual writer, has observed:

"I did not come to photography looking for magic. I came looking for a way to speak my pain. In the process of finding images to portray my darkness, I passed through the shadows into the light. Now I am one of photography's many lovers, devoted to the art of seeing and revealing. Every second I spend looking through the lens waiting for someone's beauty to surface, a cloud to move, the light to turn from gray to gold; every hour that passes as I stand in the darkroom with safelight shining, transforming the negative into a positive, I am warmed and transformed. There is something about this work, something healing about this search for the light. Like the pilgrim's journey, it's heaven all the way."

In Everlasting Moments, Swedish film director Jan Troell (The Emigrants, The New Land) has made an extraordinary film about a brave and creative working-class housewife who keeps her soul alive through learning the art of photography, despite the onerous tasks of earning money as a seamstress and raising seven children. The drama charts her resiliency in the face of staggering odds and setbacks as her creativity shines and gives her a keen sense of personal satisfaction and fulfillment.

In the early 1900s in Sweden, Maria (Maria Heiskanen) lives with her husband Sigfrid (Mikael Persbrandt) in a working-class neighborhood. They have a large family, and he works on and off as an unskilled laborer. When their financial condition worsens, she decides to sell a camera which they won in a lottery. At the shop, Maria meets Sebastian Pedersen (Jesper Christensen) who says that he will purchase the camera but convinces her to try using it herself and see what happens. Maria's first picture is of her children, and she is surprised by the miracle of catching a moment in time and preserving it in all its wonder.

The household calm is constantly shattered by Sigfrid's alcoholism. He does join the local Temperance Society but repeatedly falls back into his addiction. When he is drunk, he lashes out violently at Maria and she becomes ever more wary of his moods. One time, she flees with the children to her parent's apartment. Her dying father tells her that she must stay in the marriage no matter how bad it is: she made a vow before God and community which must be kept for all time. Maria takes his advice to heart and returns home.

Maja (Callin Ohrvall), the eldest daughter of Maria and Sigfrid, serves as the narrator of Everlasting Moments. She is very close to her mother and has little patience for her father, especially when she discovers that he is having an affair with a barmaid. Maja helps the family by looking after her younger brothers and sisters; when she is old enough, she takes a job as a maid for a woman whose lecherous brother tries to have his way with her.

Despite their poverty, Maria manages to expand her range of photographs from pictures which chart her own life to those that honor the lives of others (a peaceful portrait of a little girl who died and another of a mentally handicapped girl). Sebastian is astonished at the clarity of her photographs and is pleased when her picture of three national dignitaries is used by the local newspaper. At one point, he offers her a job in his shop but she refuses saying that she has too many family obligations. Sigfrid is very jealous of her photography and nearly kills her one day in a fit of anger. He is sent to prison and Maria becomes the sole breadwinner. When released, he seems to be a different man.

Alex Grey, a creative artist, has written: "In the act of deeply seeing, we transcend the boundaries between the self and the otherness of the world, momentarily merging with the thing seen." Filmmaker Jan Troell draws out an astonishing performance from Maria Heiskanen as Maria, a woman who breaks through the barriers of gender, class, and time to express herself in ways beyond her wildest imaginings. Jesper Christensen is perfect as the true friend and mentor who believes in her talent and encourages her every step of the way. From the first mystical moment when Maria stops for a moment in her tracks to ponder the beauty of an icicle, we are entranced by this woman's attention to the details of life. "Not everyone is endowed with the gift of seeing," Sebastian tells Maria. Director Jan Troell's talent in this regard is immense and multidimensional and evident in every frame of this wonderful film!

Special features on the DVD include Troell Behind the Camera, a short documentary made during production; The True Story of Maria Larsson, a collection of photographs by Larsson, with narration by writer Agneta Ulfsater-Troell; and Troell's Magic Mirror, an hour-long documentary on the director's career. 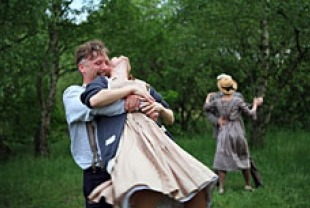 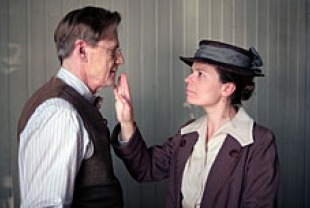 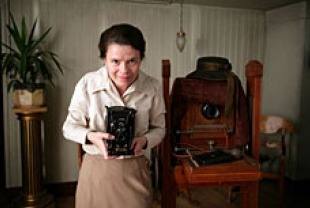