Directed by Louis Psihoyos
A thoroughly shocking documentary about the slaughter of dolphins in Taiji, Japan.

Dolphins are the most social creatures on the planet, and they are the only known wild animals that will come to the rescue of a human being. These creatures have a much larger brain than humans, and they have a highly developed sense of hearing. They use clicks and whistles to communicate with each other. Anyone who has seen them leaping gracefully out of the water senses that dolphins are also incredibly playful mammals who know how to make the most of their freedom.

But over the years many dolphins have been captured by Sea World and other enterprises where they are trained to perform in shows and live the rest of their lives confined in small areas and cut off from their pods. Some in frustration decide to stop breathing. That is what happened to the lead dolphin on the television series Flipper. After witnessing this, Richard O'Barry, who captured and trained Flipper, was transformed into becoming the most vocal advocate for dolphins in the world.

In this unusual and compelling documentary directed by Louis Psihoyos, a group is formed to expose the secret slaughter of 23,000 dolphins a year in one cove in Taiji, Japan. This fishing village is famous for distributing the majority of "show dolphins." Lots of money is made on these sales. O'Barry gets together with filmmaker Louie Psihoyos and a crew of divers, tech experts, cameramen, and others in a heroic attempt to catch on video the actual slaughter of the dolphins.

The Cove also reveals other guilty parties in this staggering cover-up. They include the International Whaling Commission, which enables the dolphin massacres to happen, and the Japanese government, which not only looks the other way when the subject comes up but goes along when dolphin meat is sold on the market as "whale." This despite the fact that scientists have proven that dolphin meat is filled with mercury which is hazardous in large quantities. When Japanese citizens are interviewed on the street and asked about eating dolphin meat, they are shocked at the idea. Not as shocked as you will be when you see that the dolphin meat is being peddled to school lunch programs!

The Cove is a film that reveals the barbarity of the Japanese entrepreneurs who see killing dolphins as "pest control" (because they eat other fish) and as a commodity to be sold into captivity or sold as meat no matter what the health consequences. Warning: the actual scenes of the slaughter of dolphins is almost unbearable to watch but necessary to expose the truth!

Special features on the DVD include an audio commentary with director Louie Psihoyos and producer Fisher Stevens; a Mercury documentary: "The Cove: Mercury Rising"; deleted scenes; and behind-the-scenes videos. 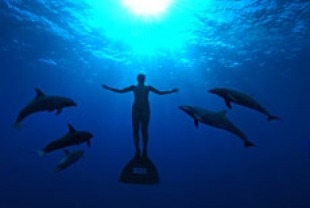