Directed by Anna Boden, Ryan Fleck
A combination sports story and immigrant account that reveals the wisdom of downsizing our dreams and making choices that affirm our deep-seated need for community.

Every major league team operates a baseball academy to discover new talent on the small Caribbean island of the Dominican Republic. Miguel "Sugar" Santos (Algenis Perez Soto) grows up with the single intention of becoming a star and playing in the United States. His mother has also pinned her dreams of a better future on her athletic son. Sugar tells his girlfriend that the first thing he'll do is buy a Cadillac. His dream seems to be guaranteed when he is invited to spring training in Arizona. But it takes a while for Sugar to comprehend how drastically his life has changed in this new setting of affluence. One of the major problems is his limited understanding of English which makes him feel like an alien from another planet.

Sugar does well in training camp and is sent to pitch for a minor league team in Bridgewater, Iowa. There he settles down with an elderly couple (Ann Whitney and Richard Bull); these baseball fanatics are kind-hearted midwesterners who have hosted other players from the Caribbean islands.

Sugar's knuckle curveball works and he strikes out many batters; the coach is very pleased with him. But he still feels like an outsider and that is fed by the departure of Jorge (Rayniel Rufino), his best friend on the team, the rejection of a pretty white girl (Ellary Porterfield) after he kisses her, a racial incident at a nightclub, an injury to his foot that puts him on the sidelines, and the arrival of a new hot-shot pitcher who wows the coach. To regain his poise, Sugar takes some drugs and falls further into a slump.

Sugar is written and directed by Anna Boden and Ryan Fleck (Half Nelson). They have a knack for creating characters who easily draw out our empathy as we observe how they handle obstacles and change. Algenis Perez Soto is very convincing as Sugar, a handsome young man who has big dreams and the courage to set out on a new path when it is necessary for him to do so. Unable to cope with the loneliness and his slump, he leaves Iowa and heads to New York City where he lands a job at a diner, finds a carpenter (Jaime Tirelli) to mentor him, and reconnects with Jorge who is now playing baseball with a group of Latinos who have all tried and failed to make the major league teams. Whereas some would say that Sugar is a failure, the filmmakers show just the opposite: he accepts his limitations and settles down to a life in community where he can even get back to the pleasure of baseball as just a fun game. 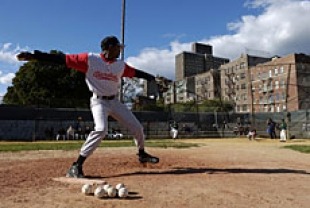 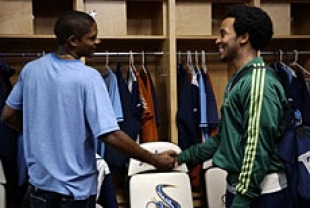