Directed by Kevin Macdonald
A brisk and well-acted political thriller about power, friendship, murder, and greed.

State of Play is an old-fashioned political thriller that reveals the nasty things that are done in service of power and greed. The film moves along briskly with complex characters and an underlying theme of the money to be made off the so-called war on terrorism. The actors are uniformly excellent even some of the bit players. Kevin Macdonald directs and proves that he has the right stuff; he was also at the helm of The Last King of Scotland. The screenplay is based on a BBC television series created by Paul Abbott.

In the opening scene, a young pickpocket is gunned down and a fellow on a bike who witnessed the shooting is also murdered. Then a pretty young woman dies in a Washington D.C. subway station. It turns out that she was a researcher working for U. S. Congressman Stephen Collins (Ben Affleck), a rising young politician who serves as the chair of a committee overseeing defense spending. He is in the middle of a hearing investigating the activities of Pointcorps, a private security company that has been operating in Iraq but aims to take over Homeland Security.

Cal McAffrey (Russell Crowe), a scruffy and seasoned D.C. reporter, is looking into the first shootings. His editor Cameron Lynne (Helen Mirren) tells Della Frye (Rachel McAdams), who writes an online blog, to get his help on the researcher's death since there are now questions swirling around Collins' relationship with her. McAffrey and Collins were roommates in college, and he's aware that Collins is having marital troubles with his wife (Robin Wright Penn). As the plot thickens, Collins turns to his old friend for counsel. When crucial information is discovered about the person who recommended the researcher for the job, the two reporters are put under incredible pressure to complete the story and beat out the competition.

State of Play is built on intertwining of stories about newspaper reporting, sources, and the media's struggle for financial survival; political power and the strange things it does to Congressmen and others in the Washington corridor; and the incredible money that can be made in what one character calls "the Muslim terror goldrush." Given all of these challenges, it behooves the press to be more vigilant than ever before. 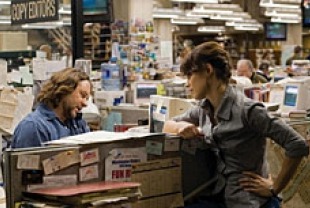 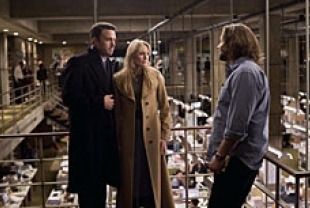 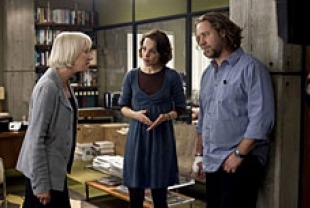