Directed by Paolo Sorrentino
An operatic drama about a power-hungry Italian politician and his nefarious cronies.

There have been plenty of movies about power and its invidious toxins that bring death and destruction in its wake. Many of these star ancient monarchs; quite a number chart the careers of politicians. In this strange and operatic drama written and directed by Paolo Sorrentino, the focus is on Giulio Andreotti, the legendary Italian statesman and longtime Christian Democrat leader.

In the spring of 1991, this enigmatic and shrewd politician (Toni Servillo) begins his seventh term as Prime Minister. His supporters include legislators, businessmen, cardinals, and enforcers. Looming in the back of Andreotti's mind is the widely covered kidnapping and assassination of Aldo Moro, a fellow Christian Democrat, by members of the Red Brigade a decade earlier. Since then there have been a series of murders and suicides, including the shooting of a journalist who was very critical of Andreotti. The power-hungry politician sets his sights on a new objective: election to President of the Republic. More violence ensues including the death of a famous government prosecutor. Andreotti loses, and his party is deemed ineffective. A crusading journalist Eugenio Scalfari (Giulio Bosetti) says to him: "You're either the most cunning criminal in the country because you never got caught or you're the most persecuted man in the history of Italy."

The film is rather hard to follow given the complexity of Italian politics. Nonetheless, director Sorrentino draws out a towering performance from Tony Servillo as the unflappable, hunch-backed, dogmatic, and imperious Andreotti, who is also a devoted Catholic. The operatic nature of the drama comes through in the bombastic music and the Fellini-like images of Rome's architecture. The last section of the film deals with "The Trial of the Century" as charges of are brought against Andreotti that he was involved in a conspiracy with the Vatican, the Mafia, and the secret neo-Fascist Masonic Lodge P2.

At one point, the Prime Minister speaks directly to the camera in a confessional tone and says cryptically: "We can't allow the end of the world in the name of what's right. We must love God greatly to understand how necessary evil is for good. God knows it, and I know it too." Sorrentino claims that this critical scene is a dream but it does reveal the terrible consequences that can ensue from a dualistic view of the world. 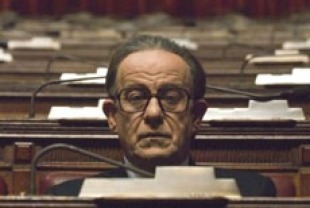 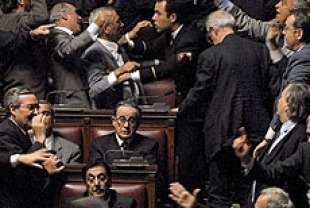