Directed by Ron Howard
A thinking person's thriller with fascinating twists and turns, insights into Vatican politics, and questions about the relationship of religion and science.

In this fast-paced follow-up to The Da Vinci Code, a progressive Pope has died in Rome and it is time for the Conclave, the process by which the College of Cardinals elects a new Holy Father. For the time being, the power of the Vatican resides in the Camerlengo (Ewan McGregor), the secretary of the deceased pontiff who becomes the acting head of Vatican City. He recognizes that the church is at a crossroads and at one point, describing a war between science and religion, urges religious leaders to fight this trend with "openness."

When four of the preferiti, the Cardinals thought to be the most likely to elected Pope, are kidnapped, the Camerlengo sends for Robert Langdon (Tom Hanks), a Harvard professor who specializes in symbology. Although he ruffled the feathers of the Catholic Church in cracking the controversial Da Vinci code, he's still the perfect man to decipher the clues and locate the kidnapped Cardinals. He has a penchant for adventure and an encyclopedic knowledge of art, Vatican history, and Catholic ritual. When he arrives in Rome, the city is packed with tourists and loyal sons and daughters of the church who are gathering for the introduction of the new Pope.

Langdon learns that the group behind the attack on the Catholic Church are modern day members of a 400-year-old secret society, the Illuminati (Enlightened Ones), who suffered persecution for their secular free-thinking and belief in progress through science. In revenge for a purge of their people centuries ago, they have a master plan that includes destroying Rome with a canister of antimatter stolen from CERN (European Council for Nuclear Research), the world's largest particle physics laboratory. Vittoria Vetra (Ayelet Zurer) is called to Rome to help out since she is the only person who knows how to disarm this deadly device.

Langdon and Vittoria begin their search for the kidnapped Cardinals in a race against time, assuming that the canister bomb is located near them. They are assisted by Commander Richter (Stellan Skarsgard) of the Swiss Guard who have been defending the Vatican since 1506. His loyalty to the Catholic Church is unflinching, and he is not pleased with the large role given to Langdon in this manhunt. Also involved in the search is Inspector Ernesto Olivetti (Pierfrancesco Favino) of the Gendarmarie police. He joins the American symbologist and the Italian scientist as they follow the clues in art pieces, sealed crypts, catacombs, and famous cathedrals. And taking it all in is Cardinal Strauss (Armin Mueller-Stahl), a gifted mover and shaker in Vatican politics.

Angels & Demons is directed by Ron Howard, and it is a thinking person's thriller filled with fascinating twists and turns, a quick tour of ancient Roman art and architecture, insights about the war between the Vatican and science, and a glimpse into the traditions and power plays of the Catholic church — both in the past and in the present. Enhancing the suspense is the soaring music by composer by Hans Zimmer.

But the real credit for this movie's success goes to Tom Hanks, who rounds out the Langdon character with a sense of humor, and the screenplay writers, David Koepp and Akiva Goldsman, who have done a fine job of bringing Dan Brown's bestselling novel to the screen. Are today's scientists trying to claim the power of creation, and is this a threat to religious authority? Are science and religion competitors or complementary sources of truth? You'll be thinking about these issues even after the rest of the questions in this movie are cleared up.

Special features on the two-disc extended edition DVD include "Rome Was Not Built in a Day" - the filmmakers share their secrets to creating the world of Angels & Demons; writing Angels & Demons - Dan Brown and the screenwriters discuss adapting his best-selling book into a movie; "Characters in Search of the True Story" - the cast share their experiences of bringing Dan Brown's characters to the screen; "CERN: Pushing the Frontiers of Knowledge" - a look at one of the world's largest and most respected scientific research centers; "Handling Props" - the filmmakers discuss bringing the props from Dan Brown's book to life; "Angels & Demons: The Full Story" - a complete behind-the-scenes look at making the film; and "This Is an Ambigram" - meet ambigram artist John Langdon, the inspiration for Dan Brown's leading character. 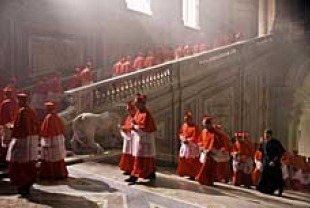 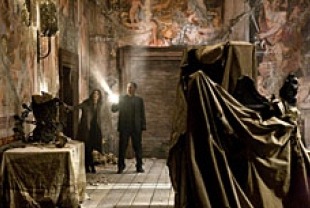 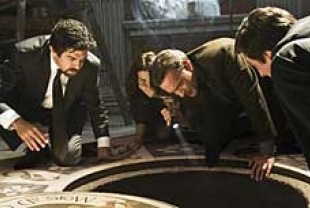 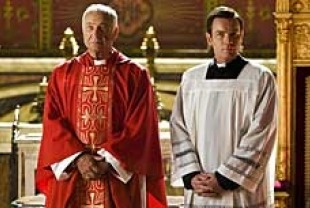 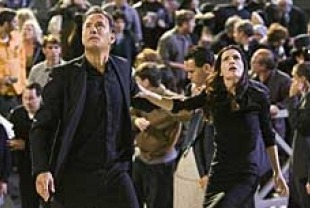