Directed by Sam Mendes
An incredibly original and appealing drama about the quest of two intimate lovers to find the perfect home to raise their child.

From the opening scene of a man giving his lover cunnilingus and savoring the changed taste of her vaginal fluid to the grand finale with a glowing image of the same couple sitting side-by-side blissed out, Away We Go is a fresh, funny, and creative exploration of the challenges and pleasures of true intimacy. Director Sam Mendes (American Beauty, Road to Perdition, Jarhead, Revolutionary Road) has fashioned a poignant drama about the quest of two lovers to find a suitable new home for themselves and their child on the way. As they journey across the U.S. and Canada looking for the right place to set down deep roots, they are exposed to a group of quirky family members, friends, and acquaintances who all have their own fixed and often far-out ideas about romance, love, marriage, and parenting. The key to the film's incredibly original and appealing qualities is the imaginative screenplay by novelists Dave Eggers and Vendela Vida. Equally moving is the haunting folk music by singer/songwriter Alexi Murdoch.

Burt (John Krasinski), an insurance agent, and Verona (Maya Rudolph), an anatomical artist, have been in a loving relationship for years and are delighted when they learn they are going to have a baby. They are living in Colorado so they can be close to his parents and are floored when Jerry (Jeff Daniels) and Gloria (Catherine O'Hara) announce that they are going to be spending the next two years living in Belgium. Burt and Verona realize that there is now no reason why they need to stay in Colorado. So they decide to embark on a quest to check out other communities.

Their first stop is Phoenix for a visit with Verona's former colleague Lily (Allison Janney) who is married to Lowell (Jim Gaffigan). They are an odd couple: she is loud and vulgar and dismissive of her children; he is cynical and depressed about the sad state of the world. By the time Burt and Verona leave for Tucson to see her sister, they are weighed down and exhausted by Lily's and Lowell's energy.

Grace (Carmen Ejogo) is Verona's only living relative and she warmly embraces her sister. They reminisce about the past and the deaths of their parents. Then it's off to Madison, Wisconsin, to see Burt's childhood "cousin," LN (Maggie Gyllenhaal), who lives with Roderick (Josh Hamilton). They share their ideas about avoiding the three s's in life (no separation, no sugar, and no strollers) and try to make a case for their practice of having sex in front of their children. Burt actually gets very angry about their advice, and he and Verona flee after pulling off a hilarious stunt.

In Montreal, they stop by to see their former classmates Tom, (Chris Messina) and Munch (Melanie Lynskey), who have adopted mixed-race children and seem to have a happy family life. For a while, Burt and Verona feel at home here until the façade breaks and they discover the heartbreak that haunts this marriage.

The final leg of the journey is an unplanned trip to Miami to be with Burt's brother Courtney (Paul Schneider) whose wife has walked out on him and their young daughter. He is feeling very blue about the devastating impact upon his child of having no mother to share her magic moments.

Away We Go is a wonderful film about the longing for home. The novelist and Protestant minister Frederick Buechner has written:

Burt and Verona win our allegiance early in the drama with their honesty and emotional integrity as they try to work on their major disagreement: he wants to get married and she doesn't. Instead they create their own vows to each other and a set of promises to their unborn child.

It is a lark to see the varied responses they receive to their romantic relationship and their ideas and ideals about parenting. Along the way in the middle of their quest, they wonder whether they have the wherewithal to handle the uncertainties which lie ahead. But, of course, they do. They have their love for each other and the yearning to make the best home they can to raise their child. The place they ultimately choose is perfect, and they deserve the joy and the beauty and the blessings that come with it.

This movie is funny and touching and also raises some wonderful questions about what makes a relationship really sing. You'll find yourself smiling in recognition and in support of this couple all the way along.

Special features on the DVD include: the making of Away We Go - go behind the scenes and see how the film developed from casting to final cut; Green Filmmaking - from carbon offsets to hybrid transportation, discover the creative steps taken to make the production more environmentally friendly; and a feature commentary with director Sam Mendes and writers Dave Eggers & Vendela Vida. 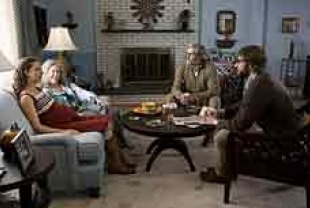 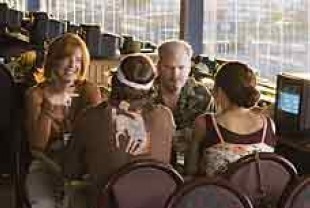 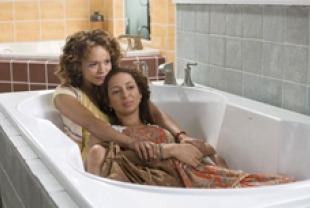 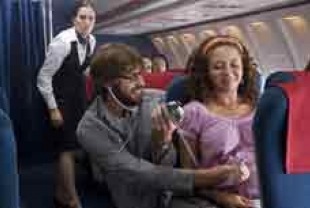 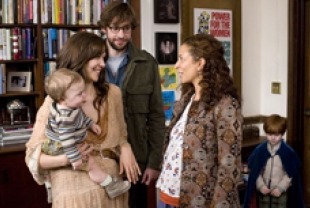 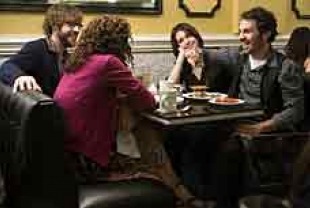 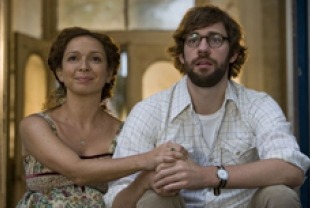