Directed by Kevin Smith
A far-out and phantasmagorical morality play about one woman's unorthodox odyssey of faith.

"Comedy," Christopher Fry reminds us, "is an escape not from truth but from despair: a narrow escape into faith." Kevin Smith's far-out and phantasmagorical morality play is a daring and unorthodox exploration of one woman's odyssey of faith. Along the way, the film presents some zany commentary on institutional Christianity, angels, demons, modern day immorality, and the mysterious presence of God. Fasten your seatbelts, for this is an incredible ride!

Cardinal Glick (George Carlin) in New Jersey kicks off a "Catholicism Wow" campaign designed to lure the young back to the church with an image of Jesus as a good buddy. Meanwhile, Bartleby (Ben Affleck) and Loki (Matt Damon), two fallen angels who have been exiled to Wisconsin for eternity, hatch a plan to go home by re-entering heaven by passing through a particular portal of a New Jersey church at a particular time. Unfortunately, if they make it, God will be proven fallible and the whole world will be obliterated.

Metatron (Alan Rickman), an angel who's on good terms with the Divine, recruits Bethany (Linda Fiorentino), a Catholic abortion clinic worker, to lead a holy crusade. Is she really the last scion of the Jesus line? Not knowing where this will all lead, she decides to take a leap into the dark and heads off to New Jersey to save the world. She is joined by Rufus (Chris Rock), the little heralded thirteenth apostle who claims that the Lord was black; Serendipity (Salma Hayek), a celestial muse who quits her job as a stripper; and two dork assistants — the foul-mouthed Jay (Jason Mewes) and Silent Bob (Kevin Smith). These two characters have shown up in all of Kevin Smith's movies.

Dogma is propelled by a rambunctious spirit of riot and frolic. As writer and director, Kevin Smith (Clerks, Chasing Amy) draws us into his kooky vision of the infernal tangle between good and evil. Lurking in the background of the drama is the demonic Azrael (Jason Lee) whose grudge against God has re-animated the vengefulness of Bartleby and Loki. But God (Alanis Morissetti) herself has the last laugh. Faith, according to Smith, to be vital and transformational must keep moving and growing. 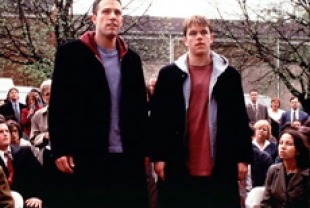