Directed by Karin Albou
A sensuous, astonishing, and memorable film about the different shades of love in sexuality, friendship, and marriage.

The setting for this astonishing film written and directed by Karin Albou is Tunis in 1942. The Nazis occupy the country and use radio propaganda to blame everything bad on the Jews in the country. They drop leaflets from a plane to get Muslim cooperation while explaining that America and England have no respect for them. In one scene U.S. planes bomb the city. Everywhere in Tunis, people are afraid for their lives and suffering economic hardships.

The main focus of The Wedding Song is the close friendship between two teenagers, Nour (Olympe Borval), a Muslim, and Myriam (Lizzie Brochere), a Jew, whose houses share the same courtyard. They are both excited about Nour's engagement to Khaled (Najib Oudghiri), who is having trouble finding work. Myriam's mother Tita (Karin Albou) is a poverty-stricken single parent whose meager wages as a seamstress cannot cover a reparation payment imposed on Tunisian Jews by the Nazis. That is why she turns to a wealthy doctor (Simon Abkarian) as a potential husband for her daughter, even though he is much older and Myriam is against this arrangement. She has her own ideas about love.

Writer and director Karin Albou does an incredibly good job conveying the complexity of the intimate friendship between the two girls. We see Nour save Myriam when she is grabbed by the Nazis, and we watch Myriam cover for Nour when she secretly meets with Khaled who is eager to have sex with her. But their closeness is undermined by the harsh political climate of the times. Khalad finds work with the Germans and tries to convince Nour that her friendship with a Jew jeopardizes her life. Then there is Myriam's jealousy of Nour's love and Nour's anger over her friend's freedom to go where she wants and do what she wants while she has to be satisfied with the repressive rules regulating the lives and education of Muslim women.

Another commendable aspect of The Wedding Song is the depiction of women's lives in the city apart from men. Albou takes us to an all female pre-wedding party, conversations in the women's section of a hammam (public bathhouse), and a ritual involving the removal of Myriam's pubic hair in preparation for her marriage ceremony. The director also covers the religious clash between Islam and Judaism with a surprisingly effective and inspiring final scene. The Wedding Song is a sensuous and memorable film about the different shades of love in friendship, marriage, and sexuality. 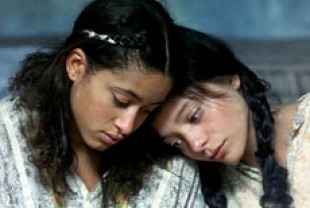