Directed by Katherine Dieckmann
Portrays a time-starved mother who is willing to throw herself into parenting but also realizes the need to care for her own soul.

Mothers around the country will identify with the New York City mother in this funny and revealing film. She arises early in the morning with a to-do list that is daunting. Not even several cups of coffee can give her the energy and speed she needs to accomplish all these tasks and errands in one day: get two kids out of bed, feed them breakfast, look in on the elderly neighbor next door, take the kids to school, move the car (hubby was supposed to do this but forgot), go shopping with your best friend, go to pick up gifts and a cake for your daughter's birthday party at your place, and try to squeeze in as much time as possible for your own special projects, including a blog on parenting. The message here is clear: The major challenge for mothers today is the lack of time to mix the routine chores of everyday life and the self-nurturing activities which are life sustaining in such a hectic era. Not to mention, keeping a marriage alive through constant squabbles about schedules while negotiating child care and keeping in touch via cell phone.

Writer and director Katherine Dieckmann has based this comedy on the experience of raising two kids in a rent-stabilized walk-up apartment in New York's gentrified West Village. Many of the funniest scenes deal with the irritations of New York City living. Eliza Welch (Uma Thurman) is a former-fiction writer tuned-mom-blogger with her own website, "The Bjorn Identity." On this particular day her psychic and physical energy is drained by confrontations with drivers who harass her as she tries to get her car moved to the other side of the street to avoid a ticket, a wacko mom at the park who tells her about the latest fads in parenting, a fellow who goes ballistic when she doesn't immediately pick up her dog's poop on the sidewalk, a young man in a store line who criticizes her manner for talking too loud on her cell phone, an misspelling of her daughter's name on her birthday cake from a store.; and a fight with her best friend Sheila (Minnie Driver) who is angered by a post on Eliza's website about a secret sexual confession. It's amazing she doesn't just collapse in a heap given the cumulative impact of all these irritations, humiliations, and mishaps.

After a kind-hearted and handsome messenger boy (Arjun Gupta) helps her carry her packages to her apartment, Eliza invites him in and is pleased by his attention when she tells him about her writing. In addition, he compliments her appearance. When she tells her husband Avery (Anthony Edwards), an eccentric editor with a passion for books, they are propelled into a discussion of their intimate relationship and how it has waned in the wake of children and the chaos of everyday activities. At the end of the day, Eliza is buoyed by a surprise which Avery has for her and the whole family gathers to watch a film crew shooting a scene on the street. It is a magical way to end the birthday celebration for Clara (Daisy Tahan). Motherhood taps into the difficult challenges facing time-starved women who are willing to throw themselves into parenting but also realize the need to care for their own souls. 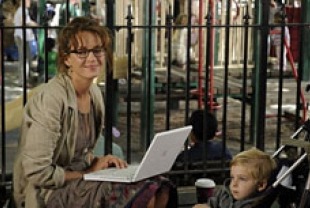 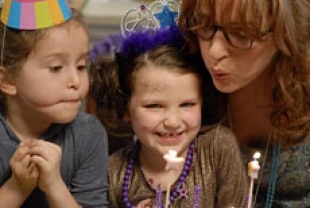