Directed by Oren Moverman
An emotionally affecting drama about the birth of compassion in an Iraq war hero assigned to work for the Casualty Notification Office.

Staff Sgt. Will Montgomery (Ben Foster) is an Iraq War hero who was wounded in the leg and face by shrapnel. He has only three months left on his enlistment and suddenly finds himself assigned to the Casualty Notification Service, one of the most unwanted jobs in the Army. In addition, Will is still wincing from the pain of being betrayed by his ex-girlfriend (Jena Malone) and daily has to deal with post-traumatic stress that plunges him into moods of dark despair and self-destructiveness.

His new partner is Capt. Tony Stony (Woody Harrelson), a seasoned veteran who has seen and done it all. He informs Will of the rigors of the notification procedure: get to the family as soon as possible, stick to polite but formal announcements, don't get involved, and don't touch anyone. On the various calls made by Will and Tony, they see a variety of emotional responses to the deaths of sons, husbands, and brothers: disbelief, numbness, rage, and violence. As the bearer of terrible news, Tony has grown accustomed to these expressions of anguish and grief. Will, with so much already on his plate, is more vulnerable.

Director Oren Moverman puts us in the center of a circle of compassion in this top-drawer and emotionally literate film. We empathize with the added burden given to Will, and we certainly are saddened by the shock and grief of parents and partners as they respond to news of the deaths of their loved ones. Tony has his own demons to wrestle with, including his addiction to alcohol and womanizing which he uses to cover up his loneliness.

Gradually, Will's heart begins to open to those who have lost their sons and daughters to wars so far away. But he is not prepared for his reaction to Olivia Pitterson (Samantha Morton), the white widow of an African-American soldier. They are immediately attracted to each other but do not want to act on their desire because it is so inappropriate. When they finally meet alone in the kitchen of her home, the scene is filled with dramatic tension and sexual heat. The same intense atmosphere is evident in the camaraderie of Will and Tony as they share secrets and bond in a wild bender.

The birth of compassion in a warrior is not an easy thing to depict on the screen but Moverman has done so with both sensitivity and skill. That is why we can put The Messenger in the same category with other affecting Iraq war movies such as The Hurt Locker and In the Valley of Elah. It's not an easy film to watch, which is all the more reason why Americans in particular should see it.

Special features on the DVD include an audio commentary with director Oren Moverman, producer Lawrence Inglee, and actors Ben Foster and Woody Harrelson; "Going Home": reflections from the set; Variety screening series; the shooting script of The Messenger; and a Q & A with director Moverman, producer Inglee, actors Harrelson, Foster, and Alessandro Camon, and cinematographer Bobby Bukowski. 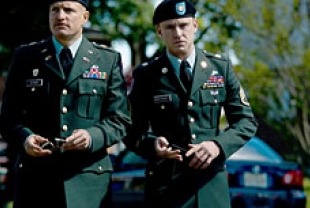 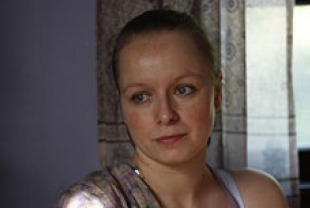