Directed by Jeb Stuart
A sturdy, sensitive drama about the Civil Rights movement in North Carolina in 1970, revealing the scourge of American racism in all its ugly manifestations.

In 1970, Reverend Vernon Tyson (Ricky Schroder) arrives with his family in Oxford, North Carolina, to serve the town's all-white Methodist Church. Although the civil rights movement is already ten years old, resulting in many changes in the lives of people elsewhere, it has bypassed this community where blacks outnumber whites yet have been kept in their place by Oxford's leaders. When the minister invites a black clergyman as a guest preacher, he feels the heat from local bigots and members of the congregation. His ten-year old son Tim (Gattlin Griffith) is shocked by the hatred displayed towards blacks by his peers. One night his father exposes him to a meeting of the Ku Klux Klan as an introduction to the power of hatred.

Ben Chavis (Nate Parker), a young and charismatic teacher in an all-black Oxford school, wants his students to stand up for themselves and speak out against injustice. When he learns that they have been denied the right to play basketball on public courts, Chavis tries to change things but is defeated by the town council. Then a tragedy turns things around for blacks in Oxford: Ben's cousin, Henry "Dickie" Marrow (A. C. Sanford), who has just returned from a tour of duty in Vietnam, is murdered by a gun toting racist father, Robert Teel (Nick Searcy), and his two sons. There are several black witnesses to this horrific crime. The Teels are not arrested for two days.

The anger in the black community over Marrow's murder is channeled into a peaceful 50-mile march to the state capitol organized and led by Gordon Frinks (Afemo Omilami), a national figure in the civil rights movement. Back in Oxford, the rage of the young blacks reaches a high point when they learn that the entire jury for the Teels' trial is white. Using Molotov cocktails, they set fire to the town's tobacco warehouses. Frinks leaves and Chavis takes over as the leader of his people. He empowers them to come up with a new strategy: boycotting the businesses of Oxford that have treated them as second-class citizens for so long. Rev. Tyson also leaves after he is asked to step down, but his crusade to teach Christians about the importance of justice finds a zealous and dedicated convert in his son Tim.

Blood Done Sign My Name is directed by Jeb Stuart based on a book by Timothy Tyson, the 10 year-old son of the Methodist minister in the film. There have not been enough depictions of the breadth and the depth of the civil rights movement in America. This sturdy and sensitive true story provides a close encounter with the courage and the perseverance that is needed by citizens to combat racism and bring about social and institutional change. 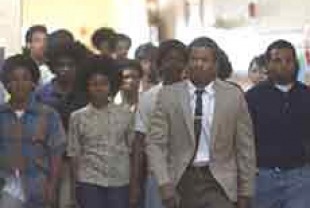