Directed by Tim Burton
An exotic tale about a young woman's adventure in an alternate reality that tests her will power, resourcefulness, and courage amidst weirdness and danger.

Little Alice awakens one night and is troubled about a nightmare in which she falls down a hole in the ground and runs into all kinds of odd creatures. She asks her charismatic and consoling father: "Do you think I've gone around the bend?" and he responds "All the best people are." He then assures her it was only a dream and that she should pinch herself and wake up whenever it happens again.

Thirteen years later, Alice (Mia Wasikowska) is a nineteen-year-old Victorian lady whose proper mother (Lindsay Duncan) is troubled by her streak of nonconformity and her disregard for what people think of her. In this regard she is like her adventurous father who has died. Alice joins her mother at a gigantic lawn party and discovers that she is to be the center of attention. Hamish (Leo Bill), a pompous aristocrat, proposes to her on his knee and she, not knowing what to do, runs off and follows a spunky and strange rabbit (voiced by Martin Sheen) down a hole.

Instead of "Wonderland," Alice enters "Underland" where she faces the challenges of shrinking and then growing very tall, thanks to some magic potions. In this weird world of exotic plants and talking animals, she meets a very odd group of characters including Tweedledee and Tweedledum (Matt Lucas), twins with very large round heads who seem to have made a pact to agree to disagree about everything; a floating Cheshire Cat (Stephen Fry) who likes playing now-you-see-me/now-you-don't games; and the March Hare (Paul Whitehouse) who is constantly throwing things at everyone (watch out you don't get hit in your 3-D glasses!).

In the presence of all these strange creatures, Alice decides she must be dreaming, but pinching herself doesn't change anything. Her chief problem is that everybody thinks she is another Alice whom they expect will lead them against the powerful and malevolent Red Queen (Helena Bonham Carter) who uses pigs as foot stools and orders her underlings to take off the heads of anyone who doesn't support her. Her two major weapons are a ferocious dog-like creature and a dragon-like Jabberwocky who strikes fear into the hearts of all in her kingdom. Her right-hand man is Stayne, the Knave of Hearts (Crispin Glover), who obeys her orders but is not happy doing so.

The Red Queen has three major opponents: her sister the White Queen (Anne Hathaway); Bayard (Timothy Spall), a hunting dog who infiltrates her forces; and the Mad Hatter (Johnny Depp), who loves being a rebel and relishes headgear of all shapes and colors. Absolem, the Blue Caterpillar (Alan Rickman), is the philosopher of Underworld and he does all he can to help Alice see that she needs to retrieve her "muchness."

Tim Burton directs Alice in Wonderland, a 3-D blend of live action and animation. Linda Woolverton's screenplay is based on Alice's Adventures in Wonderland and Through the Looking Glass by Lewis Carroll. Burton and Woolverton have fashioned an exotic adventure tale where the heroine is a strong-willed, resourceful, and courageous nineteen year old. It's easy to imagine that the younger Alice we're familiar with from other screen versions of the Wonderland stories could have grown up to be this young woman.

Once asked about his philosophy of life, actor Sidney Poitier said: "Be true to yourself and be useful to the journey." This is a near perfect summation of what happens to Alice in the last stages of the film. Mia Wasikowska gives a tour de force performance as this clever young woman who is transformed into a heroine par excellence! We need more movies that salute the creativity, independence, and resilience of women. That is why we tip our hats to Burton's version of Alice in Wonderland, despite the anti-climactic and worn-out battle sequences at the end. Someday we'd like to see a movie about a heroic struggle that does not rely upon a Manichean conflict between good and evil; there are other ways to depict heroism that are neither wrong-headed nor wrong-hearted.

Special features on the DVD include "The Mad Hatter"; "Finding Alice"; and "Effecting Wonderland." 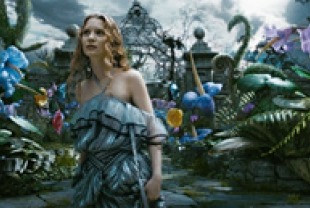 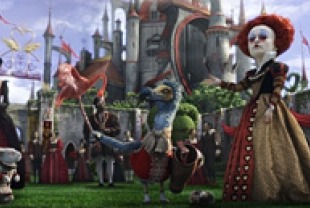 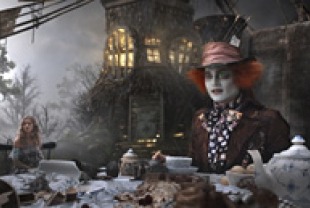 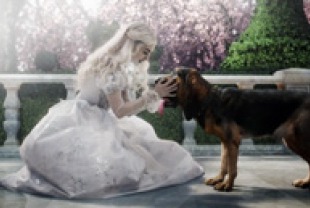