The Secret in Their Eyes

Directed by Juan Jose Campanella
A combination psychological thriller and love story that offers an engrossing look at memory, yearning, and the toxins of revenge.

The Secret in Their Eyes is a mesmerizing Argentinean film directed by Juan Jose Campanella (Son of the Bride). It is a rich and complicated drama that is at once a psychological thriller, a love story, a paean to friendship, and a meditation on the toxins of revenge. It is also about the powerful force of memory and the strange and mysterious turns it can take in our minds. Aldous Huxley once said that every person's memory is his or her private literature. That is why it is important for us to carry a treasured memory of a loved one and to let it nourish and sustain us in hard times.

Benjamin Esposito (Ricardo Darin) is a retired Buenos Aires state criminal investigator who is haunted by his memories of a 1974 rape-murder of a lovely 23-year-old woman and his inability to solve the case. In order to exorcise his guilt and his demons, he decides to write a novel about this case. Once he begins, it is more difficult than he thought it would be.

Unsure of himself, Esposito visits Irene (Soledad Villamil), his former supervisor, who is now a judge. Although at first skeptical of the project, Irene agrees to read it once it is finished. There is something in her eyes that convinces Esposito that she is still attracted to him.

In flashbacks to 1974, we learn of the romantic sparks between these two. But neither one of them is able to jump the hurdle between them: class and social differences. She is wealthy and got a law degree from Cornell; he is much more ordinary. When he meets the victim's husband, Ricardo Morales (Pablo Raga), he is impressed with the deep love this young man had for his wife and the devastation he feels over her loss. While looking at photographs of Morales' wife when she was younger, he notices a young man gazing at her. This suspect turns out to be Gomez (Javier Godino), who eludes their efforts to find him. Meanwhile the police arrest two innocent workmen from a nearby building and beat a confession out of them. This injustice pushes Esposito and Sandoval (Guillermo Francella), his alcoholic partner, to do some intensive detective work on their own. Many times, Esposito comes to the rescue of his friend who returns all the favors by coming up with a way to track the elusive suspect down. From his letters to his mother, they determine that he is an avid soccer fan. Passion tells all about a person. The same hint comes to mind when Irene, noticing Gomez's lustful looks at her breasts, takes over the so-far unsuccessful interrogation of the man.

There are many more surprises in this thematically substantive drama that won the 2010 Academy Award for Best Foreign Language Film. The screenplay by Campanella is based on a novel by Eduardo Sacheri. It convincingly explores the power of memory to shape and influence our present and future moments. There is a double edge to this faculty which can both reveal the beauty of the past or imprison us within it. The story also depicts the sadness of a couple who cannot bring themselves through fear or disappointment to declare the love they have for each other. Their yearning is expressed again and again in their eyes. Finally, the film shows us that although many choices result in an empty life, it is never too late to break that cycle and take a leap into the dark. The intense performances by Soledad Villamil and Ricardo Darin capture and convey the mystery of human personality and the beauty of a soulful connection between people.

Spiritual Practices to Try After This Movie

Gazing
In his book, The Spiritual Practices of Rumi: Radical Techniques for Beholding the Divine, Will Johnson states that the eyes are traditionally seen as the windows of the soul: "When we hold the gaze of another, we hold and cradle his or her soul." The author shares the intentional gazing practice of the thirteenth century Sufi poet Rumi and his teacher Shams-i-Tabriz. Try this practice with your soul mate or a close friend:

"The practice is really simple. Sit down with your great friend. Gaze at each other. Open to the feelings that the gaze brings to life. Then relax and surrender into the play of light and sensation as you and your friend are swept away together in the commingled waters of union. These are really all the instructions you need. The practice itself then becomes your further guide."

Harvesting Your Memories
One of the themes in this movie is the important role of memory in our lives. Most of us are so consumed with future plans and worries that we forget to savor the lessons and blessings of the past. Spiritual writer and teacher Macrina Wiederkehr writes: "The soul thrives on remembering. Feed it memories and it comes alive." Here is a spiritual practice to create memories:

The next time something unusual happens to you, note where you are and what you are feeling. Also take your spiritual pulse and try to determine what Spirit is telling you. Just an extra dose of attention will turn this moment into a memory. 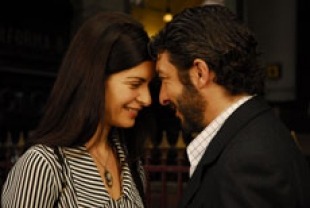