Directed by Jay Roach
A very funny comedy that also contains some insights on the spiritual exercise of dealing with difficult people.

We all have difficult people in our lives; they bedevil us, sap our energy, distract us, and can cause either minor problems or major distress with their presence. What do you do with the coworker who insists on regaling you with ludicrous jokes? How do you handle the next-door neighbor who plays loud music every night? It takes a little bit of patience and large doses of wisdom before we realize that the difficult people who press all our buttons are often our best spiritual teachers. Or as the Jewish sage Martin Buber once put it: "A person should realize that conflict situations between oneself and others are nothing but the effects of conflict situations in one's own soul." These insights are pertinent to Jay Roach's funny movie Dinner for Schmucks, adapted from a French farce titled The Dinner Game. It offers us an opportunity to laugh freely and, at the same time, to consider changing our attitudes toward the difficult people in our own lives.

Tim (Paul Rudd) is an ambitious investment analyst in a Los Angeles firm that, so far, has not taken him very seriously. With a spurt of creative energy, he develops a campaign to work with a Swiss millionaire (David Walliams). His boss (Bruce Greenwood) is so impressed with his initiative that he invites him to a party at his house where the rich and the powerful gather each month. They are required to bring a guest who, in their minds, is the biggest idiot they can find. In this game of ridicule and derision, the one with the biggest idiot wins. When Julie (Stephanie Szostak), Tim's longtime girlfriend, hears about this gathering, she strongly advises him not to attend. But in Tim's mind, winning the approval of his boss and advancing his career means being able to continue living in luxury.

Then he has a close encounter with Barry (Steve Carell), who works as a taxman and spends his spare time creating incredibly detailed dioramas of historical and fictional scenes using taxidermized mice. This lonely oddball's wife has left him and is having an affair with his power-hungry boss (Zach Galifianakis). Barry gloms on to Tim and brings a tornado of troubles into his life, including an audit from the IRS and a visit from Darla (Lucy Punch), a sexy woman from Tim's past who is obsessed with him. When Julie decides to leave Tim, she turns for consolation to Kieran (Jemaine Clement), a womanizing painter with a gigantic ego and a surprisingly weird perspective on the human condition.

Dinner for Schmucks is a very funny comedy filled with a wide range of humorous lines, pratfalls, and satirical flourishes. Of course, the major draw is the talent of Paul Rudd and Steve Carell working in tandem. Near the end of the drama, Tim makes a conscious decision to change his response to the most difficult person he has ever come across in his life. This reframing gives him a chance to work on his own shortcomings. Dinner for Schmucks can be enjoyed as a delicious comedy or as a spiritual take on ways to handle our interpersonal struggles. In the end, we are left with the message put succinctly by the rabbinic sage Ben Zoma many centuries ago: "Who is a wise person? One who learns from everyone."

Special features on the DVD include "Behind the Scenes with the Cast"; deleted scenes; and an outtakes reel. 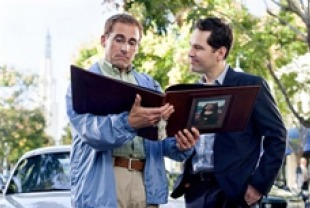 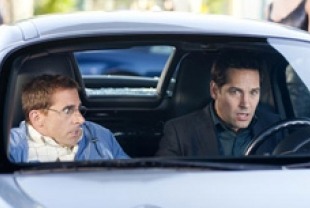 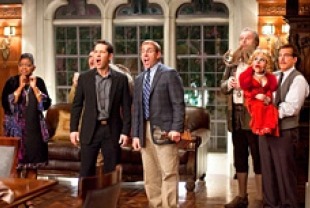 PG-13 - sequences of crude and sexual content, some partial nudity and language