Enemies of the People

Directed by Rob Lemkin, Thet Sambath
An ethical documentary about the Cambodian genocide, a Khmer Rouge leader, and farmers who followed orders and killed hundreds of people.

In the late 1970s, during the regime of Pol Pot, nearly two million people were killed by the Khmer Rouge in Cambodia. Among those were journalist Thet Sambath's father. His mother was forced to marry a Khmer Rouge militiaman and died in childbirth, while his brother disappeared in 1977. Still mourning them, Sambath decided to discover why they died in the Killing Fields and what brought about this blood bath. Much to the dismay of his wife, this intrepid journalist spends weekends visiting the home of Nuon Chea, the second in command during this genocide. After years of talking to him and winning his trust, Sambath listens as Chea explains the reasons behind the purge of Communist Party members considered to be "Enemies of the People."

Pol Pot and Nuon Chea always talked about their political process as one which was set into motion to support Cambodia's poor farmers and workers. Ironically, it was these people who conducted the massacres by slitting the throats of men, women, and children and dumping them in deep ditches in the countryside. Sambath finds some of the men who admit to having participated in the murder of so many innocent people — people who were not spies or supporters of Vietnam. These former killers slowly open up and talk about the past and their reasons for doing what they did. Many explain that they were just obeying orders and if they hadn't done so, they would have been killed. A few or these farmers show remorse and are apprehensive about their reincarnation.

Enemies of the People, directed by Rob Lemkin and Thet Sambath, is an important documentary that underscores the moral importance of investigative journalism as a tool to reexamine historical events and national tragedies and expose truths which have been covered up. We commend Thet Sambath for his patience and perseverance during the 10 years it took to gather the information, make, and release this personal journey into the heart of the Killing Fields. The documentary is a gift to present-day Cambodians who yearn for closure on this reign of terror perpetrated in the name of patriotism and paranoia. Sambath has said of the film:

"Some may say no good can come from talking to killers and dwelling on past horror, but I say these people have sacrificed a lot to tell the truth. In daring to confess, they have done good, perhaps the only good thing left. They and all the killers like them must be part of the process of reconciliation if my country is to move forward."

Coming to terms with the shadow side of a nation's history is a noble and healing spiritual exercise. Perhaps one day soon the United States will follow the lead of other countries and honestly confront the scourges and injustices of the past so that future generations will know the truth about what we have done. 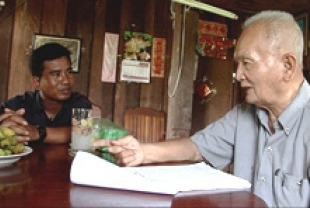