Directed by Anusha Rizvi
A satisfying and searing satire on the plight of poor farmers in India, scorned by the rich and powerful who have their own plans for national progress.

Natha (Omkardas Manikpuri) is an indolent, pot-smoking farmer who lives in the small Indian town of Peepli. He is married to a domineering woman (Shalini Vatsa) who thinks he is a lazy, irresponsible bum. His bedridden mother (Farukh Jaffer) is always complaining. Unable to pay back his government loan, Natha and his brother Budhia (Raghubir Yadav) go for help to a powerful, greedy local politician who tells them that one of them should commit suicide so at least his family would be helped. Natha eventually vows to kill himself since there is no hope coming from anyone.

But the word spreads quickly about his dire straights and the decision he has made to take his own life. One of the first to arrive in the small town is an ambitious TV reporter (Malaika Shenoy) who smells a great story. Then a major competitor from another TV station arrives with many others as well. The government has been pedaling an industrialized economy in a nation of farmers and, as a result, tens of thousands of them have been committing suicide. An election is about to take place, so the drama of Natha assumes prominence in the pubic eye. The ruling party decides to bribe him with a new water pump. The only problem is that no one in Peepli knows how to install it, so it sits in Natha's living room as a new piece of furniture. Natha's son wants to get the suicide over with so he can use the money to become a policeman. But as the media circus continues and more politicians enter the fray, Natha becomes more ambivalent about his decision to take his own life.

First-time Indian filmmaker Anusha Rizvi has fashioned a dark comedy about a serious problem in India that enables us to see the clash between the rich and powerful members of the ruling class (the politicians, bureaucrats, media establishment, and local bigwigs) who have no sympathy or understanding of the plight of the poor and downtrodden farmers who have lost their livelihoods in the name of national progress. Sound familiar? As both writer and director, Rizvi pulls out all-the-stops in this satisfying and searing satire. 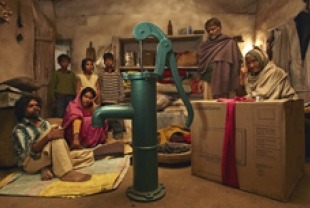 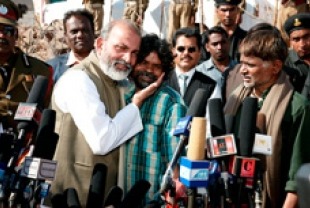