It's Kind of a Funny Story

Directed by Anna Boden, Ryan Fleck
A magical movie about five days in a psychiatric hospital that gives a depressed 15-year old a new lease on life.

Craig Gilner (Keir Gilchrist) is a smart and sensitive 15-year-old who has decided to jump off the Brooklyn Bridge to end his brief but unhappy life. But this decision turns out to be a dream signaling the breadth and depth of his depression. He attends a famous college-prep school and has been under severe pressure recently. His best friend is a genius who breezes cavalierly through life, whereas every day is a struggle for Craig. To make matters worse, he has a terrible crush on Nia (Zoë Kravitz), his buddy's girlfriend. But the main source of his anxiety seems to be rooted in a recent decision to go off his meds.

Craig calls a suicide hotline and is referred to a local hospital where he sees a doctor (Aasif Mandvi) who listens to his lament and then sends him to the hospital's psychiatric wing — the adult ward because the youth ward is temporarily closed. Here Craig meets Bobby (Zach Galifianakis), a gregarious patient who takes him on a tour. The head of this psychiatric ward is Dr. Eden Minerva (Viola Davis), a warm-hearted woman who tells Craig that he will have to stay here for five days of observation and group therapy sessions. Suddenly, Craig worries that he's made the wrong decision and there's no way out. So he decides to make the best of a bad situation.

Seeing his father (Jim Gaffigan), mother (Lauren Graham), and little genius sister (Dana DeVestern) doesn't solve his problem. They are convinced that his stay will be good for him. The one who turns out to lift his spirits is Noelle (Emma Roberts), a pretty 16-year-old who cuts herself and has tried to commit suicide. Bobby gives Craig some wise advice on conversing with a woman. Then miraculously, this outsider impresses Noelle with his display of creativity in an art class and in a band performance. Best of all, Craig generously offers a shirt from his father to help Bobby look his best when he applies to a new place to live since his time in this adult ward has run out.

It's Kind of a Funny Story is written and directed by Ryan Fleck and Anna Boden, based on Ned Vizzini's novel of the same title. This talented and adventuresome filmmaker has already made two top-drawer character-driven dramas: Half Nelson, about the friendship between an idealistic teacher in a ghetto school and a lonely 12-year-old African-American girl and Sugar, a combination sports story and immigrant account that reveals the wisdom of downsizing our dreams and making choices that affirm our deep-seated need for community.

Although more than 19 million Americans suffer from depression, it remains one of the most mysterious and troublesome forms of mental illness. In this magical movie, Craig is blessed with a sanctuary or a refuge where he can slow down, decompress, and discover the courage and the desire to renew his life as a person who is grateful for everything. Bobby helps him to see what a lucky young man he is and Noelle encourages him to be more positive in the face of the future. Craig also adds to his character virtues by serving as the catalyst for getting his reclusive Egyptian roommate (Bernard White) out of his bed and on to the dance floor. By the end of his stay in the psychiatric hospital, he has learned that no one need go it alone in life; community and friends provide the healing and energetic connections which animate the journey. 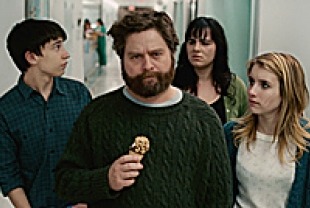