Directed by Oliver Stone
Offers an energetic look at football as a gladitorial sport.

Pro football is primal theatre for its fans. It celebrates individual effort and the value of teamwork. For millions, watching the game is their only contact with peak experiences of excellence. In today's interconnected world, football unravels into a complicated pluriverse of media, economics, celebrityhood, advertising, sports medicine, urban renewal, philosophy, and much more. Director Oliver Stone wrote the screenplay for this fast-paced, slam-bang film with John Logan. Any Given Sunday offers an energetic look at this gladiatorial sport.

Tony D'Amato (Al Pacino) has coached the Miami Sharks for 30 years. He's sacrificed everything for love of the game. When his quarterback Jack "Cap" Rooney (Dennis Quaid) sustains a career-wrecking injury, Tony finds himself battered from two sides. And the bruises are on his psyche.

Christina Pagniacci (Cameron Diaz), the ruthless owner of the team, doesn't believe the coach has what it takes to lead his players anymore. When the backup quarterback is also injured, D'Amato is forced to rely upon Willie Beaman (Jamie Foxx), a talented athlete who barfs on the field as a sign of his deep anxiety. The real trouble comes when this quarterback ignores the plays his coach sends into the game. Trying desperately to make the playoffs, the Sharks are under siege on all fronts. Worst of all, D'Amato feels he has lost control of the team.

Traditional moviegoers may be put off by the razzle-dazzle MTV-like cinematic style Stone uses to pump up the action sequences on the football field. This jerky technique is designed for the younger crowd. Equally disconcerting is the large cast of characters, including an ambitious offensive coordinator (Aaron Eckhart), who wants to replace D'Amato; an obnoxious sportscaster (John C. McGinley); a veteran defensive coordinator (Jim Brown), who misses "the purity" of the game; a chauvinistic league commissioner (Charlton Heston), who doesn't like dealing with a woman in his select club of wheelers and dealers; two team doctors (James Woods and Matthew Modine), who disagree on the best way of handling badly injured players; Luther "Shark" Lavay (Lawrence Taylor), a lineman whose career is almost over; and Julian Washington (LL Cool J), a veteran wide receiver who despises the hotdog antics of Willie Beaman.

Despite the overemphasis upon flashy cinematic techniques and the fragmented nature of the storyline filled with so many characters, Any Given Sunday is the best film Oliver Stone has made in years. In the end, Tony D'Amato's old-fashioned belief in team spirit and the grace of athletic prowess wins over the bottom-line mentality of the Sharks' owner. In sports, as in our national life together, individualism must be downplayed in order to celebrate the virtue of working together. 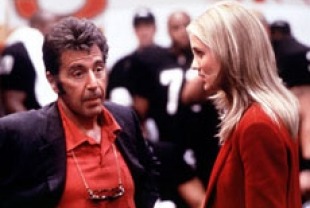 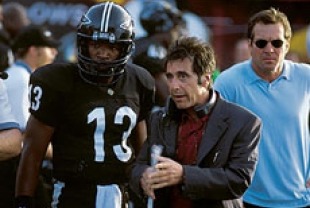 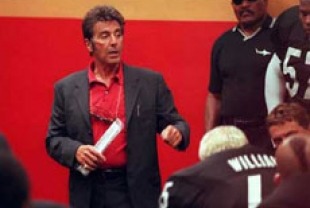