Tamara Drewe (Gemma Arterton) is a celebrity newspaper columnist who has just returned to her family's estate in the Dorset countryside in England. Once the source of ridicule because of her large nose, she is the beneficiary of plastic surgery which has transformed her into a raving beauty. Her presence stirs up the stodgy place where two bored teenagers, Casey (Charlotte Christie) and Jody (Jessica Barden), do what they can to cause as much trouble and disorder as possible, including throwing eggs at Tamara’s car when she arrives in the sleepy town of Ewedown. The other regular characters are best-selling thriller author Nicholas Hardiment (Roger Allam) and his long-suffering wife Beth (Tamsin Greig) who run a writers retreat. Nicholas is a seasoned adulterer with a penchant for young women who are attracted to him because of the allure of literary success. When once again he hurts Beth with his philandering, she turns to Glen (Bill Camp), an American academic who is slaving away on a book about Thomas Hardy.

Stephen Frears, a master of this kind of comedy of manners and social satire (Dangerous Liasons, High Fidelity), directs this humorous and spiffy film, based on the graphic novel by Posy Simmonds with a screenplay by Moira Buffini — both of whom have been inspired by Thomas Hardy’s classic Far From the Madding Crowd.

Tamara’s arrival spurs a carnival of jealousy, envy, deceit, and infatuation as many characters throw caution to the wind. The film hits a high point when Ben (Dominic Cooper), a drummer from a popular band, becomes romantically involved with Tamara, much to the ire of Andy (Luke Evans), her gardener and handyman who had a fling with her when he was much younger. The new affair ups the ante for the two teenage girls, who are very taken with Ben the superstar, and one of them is willing to pull any prank that's necessary to meet him. Almost everyone in Tamara Drewe misbehaves and, true to the comic spirit, they emerge from these frolics a little bit wiser.

Special features on the DVD include the making of Tamara Drewe; reconstructing Tamara Drewe; and a commentary with actors Gemma Arterton and Luke Evans. 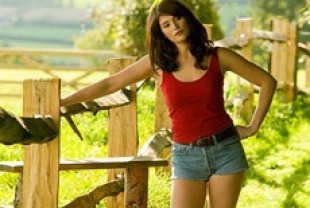 R - language and some sexuality