Directed by Clint Eastwood
A poignant, meditative, and meaningful movie about the human desire to know more about the afterlife and to communicate with the dead.

The Fear of Death

The ultimate fear,
philosophers and psychologists tell us,
is the fear of death.
We can trace all our other fears,
small and large,
to our fear of death.
On the level of the unconscious,
we adopt all kinds of tactics
to avoid thinking.
In particular,
we do not want to think about
our own mortality.
"Why be so morbid?"
we may ask.
But there is nothing necessarily morbid
about pondering the reality of death.
No need to be preoccupied with it,
of course.
But from time to time,
it's healthy to consider
our own mortality.
If, from time to time,
we reflect on,
and accept,
the fact that our days are numbered
we are more likely to inhabit the earth
in a more loving, more responsible manner.
If we accept our own mortality,
we will find it easier
to love other people,
knowing that they, too,
have but a time to live
on the earth.
Indeed,
we're all in this together.
As the old saying has it,
no one gets out of here alive.
So, the only sensible way to live
is with compassion,
forgiveness,
and tolerance.
— Mitch Finley in Whispers of God's Love: Touching the Lives of Loved Ones After Death

In old age, director Clint Eastwood continues to explore new fields of wonder with his highly original and soul-stirring movies. In this meditative and almost contemplative drama, he weaves the stories of three very different people together as they seek in their own ways to come to terms with death, loss, and their connections with others.

The sophisticated and elegant screenplay is by Peter Morgan, best known for Frost/Nixon and The Queen. It was generated shortly after he lost a dear friend in an accident. Hereafter is the kind of movie that speaks softly to us and demands that we let it simmer a while before we evaluate it. We need time to sift through the many emotional and spiritual meanings conveyed in the experiences of the three lead characters. Eastwood and Morgan refuse to take sides for or against psychic mediums, the ultimate nature of near-death experiences, or communication between those of us in this world and those on the other side. Instead they remain open to these possibilities and their relevance to those whose lives have been transformed by these experiences of love. We commend Eastwood for making such a poignant, meditative, and meaningful movie.

The Whispers of Our Heart

Before his death from cancer in 1981,
the great American writer William Saroyan
phoned the Associated Press
and dictated a final statement.
He said:
"Everybody has got to die,
but I have always believed
an exception would be made
in my case.
Now what?"
How like us all.
We all believe,
someplace deep inside
that an exception will be made
in our case.
And in a way,
we're right.
It's just that the exception doesn't happen
here and now,
in a way that people can witness
and applaud.
It happens on the other side
of an experience,
a transformation, we believe,
that we would just as soon avoid,
thank you very much.
Comic and filmmaker Woody Allen
put it succinctly years ago.
He said:
"I'm not afraid of dying,
I just don't want to be there
when it happens."
In spite of all the hints,
in spite of the occasional sign, even
— the aroma of hyacinths, for example,
where there are no hyacinths —
that death is not the end
but a new beginning,
we are naturally nervous
about dying.
It's okay to be nervous about death,
and it's probably unavoidable.
But we can still trust the whispers
of our heart.
— Mitch Finley in Whispers of God's Love

Marie Lelay (Cecile De France) is a popular French anchorwoman and political journalist in Paris who is vacationing in a small seaside town in Indonesia with her producer boyfriend Didier (Thierry Neuvic). A tsunami slams into the beach and sends a raging torrent of water through the streets of the town, collapsing houses and buildings, capsizing cars and breaking palm trees like twigs. Marie is caught in the wave, is struck by debris, suffers a concussion, but unlike so many others, she is pulled from the water. Before she is revived, she has a near-death experience where she is transported into a blurry realm of light filled with other beings.

Although Didier is able to shake off this nightmare experience and return to work in Paris, Marie finds that something has happened to her as a result of experiencing and surviving death. At work, she finds it hard to focus, making Didier suggest she take some time off. She feels isolated in her need for spiritual insight into what happened to her. At dinner, she asks him what he thinks about death, and he responds that there is nothing after it but a deep void.

Most of the time,
we don't realize
how deeply we are shaped
by the modern scientific worldview.
Science
limits itself
to what the five senses
can discover.
Unless we can see it,
hear it,
touch it,
taste it,
and/or smell it,
science refuses to believe
it is real.
This is why
we are so amazed
when we experience
— with the senses —
realities that science
cannot explain.
Should comfort
and encouragement
come from the sphere of
eternity,
we tend to doubt our own senses.
Now and then, however,
the experience is so overwhelming
and so obviously real
that all we can do
is believe.
At time such as this,
in the words of Frederick W. Faber,
a nineteenth-century English writer,
"We cannot resist the conviction
that his world is
for us
only the porch of another
and more magnificent temple
of the Creator's majesty.
— Mitch Finley in Whispers of God's Love

George (Matt Damon) is a San Francisco psychic who has had an active practice, a website, and a following. But he is troubled by his gift and the isolation and loneliness it has brought him. He has given up doing readings with people who want to contact loved ones who have died. "A life that's all about death," he says, "is no life at all." But his brother Billy (Jay Mohr) wants him to return to being a psychic and even volunteers to fund the operation.

To escape from this internal struggle, George has joined an Italian cooking class where he is partnered with Melanie (Bryce Dallas Howard), who quickly makes it very clear that she likes him and wants to establish an intimate relationship. But true to form, when she finds out that he has psychic gifts, she convinces him to give her a reading. It does not go well, and George has one more piece of evidence that seeing into people's souls can be a curse to anyone who desires a normal life. His only other solace is listening to CD recordings of the works of Charles Dickens, read by Derek Jacobi. Both George and the Victorian author have many ghosts in their heads.

They Are Not Really Gone

Over and over again
come stories of deceased relatives and friends
who return, in some form,
with the same message:
that they are not really gone,
just present in another way.
Over and over again,
we are reassured by these experiences
and these stories.
Why do we find so much comfort
in these experiences and stories?
Perhaps it's because
life is such a mixed bag;
amid all the light
there is so much darkness.
In the midst of our belief
there is so much unbelief.
So, when something out of the ordinary happens,
some event that brings reassurance
that our faith is trustworthy,
we welcome it with all our heart.
But the lesson is the same,
time after time:
ultimately,
everything is going to be okay.
— Mitch Finley in Whispers of God's Love

Jason (George McLaren) and Marcus (Frankie McLaren) are twins who live with their drug-addicted mother, Jackie (Lyndsey Marshal), in a working-class neighborhood in London. Jason was born 12 minutes before his brother and is the more social and decisive of the two. When he is struck and killed by a car, Jason is crushed and depressed. The social workers from Family Services, who have had their eye on Jackie for a while, decide that it is best for Marcus to go into a foster home. Although he is welcomed by his new family, there is only one thing that interests him: making contact with Jason. He borrows some money from his foster parents and begins visiting an odd assortment of people claiming to be psychics or mediums. He doesn't have much success — until he stumbles upon a website about George's psychic readings.

The Death of a Child

The death of a child
carries a special poignancy,
a special sadness.
At the same time,
it sheds light on the meaning of life.
No matter how long,
no matter how brief,
any life has meaning
simply because it's a life.
Any life is worth celebrating
for what that life brings into the world
and into other human lives.
Each life is a gift,
and once that life has been shared with us
it's a life that will always be there,
will always be a part of the lives
of those who knew and loved him or her.
Thomas Carlyle,
the great nineteenth-century English writer, said:
"One life, a little gleam of time between two eternities."
No matter how brief each "little gleam of time,"
it has an eternal impact on those around it.
Each life, no matter how brief, is
— to borrow an old advertising slogan —
a gift that keeps on giving.
— Mitch Finley in Whispers of God's Love

Marie, George, and Marcus seem destined to meet each other, and they do at the London Book Fair. Marie has taken some time off from broadcasting, intending to write a biography of politician Francois Mitterand, but what really has captured her imagination is her near-death experience. She travels to the Alps and meets with Dr. Rousseau (Marthe Keller), who runs a hospice there and has documented many accounts by those who have traveled to the next dimension. Her description of a NDE matches Marie's experience during the tsunami.

Marie decides to write a book titled Hereafter. Months later, she goes to do publicity in London. George, who is doing a Dickens sightseeing tour, attends a reading by Derek Jacobi at the Book Fair and happens to notice Marie's book signing. He clearly admires her courage for addressing a subject that is not popular with the public. Marcus happens to be the Book Fair, too, to meet a former child of his foster parents. He recognizes George as the psychic whose website he's visited. Hoping to get him to contact Jason, Marcus follows him back to his hotel.

Hereafter reveals how uncomfortable people get when thinking about death and what happens after death. There is a great urge to know and a pulling back from those who might be able to provide some of the "answers." Young Marcus represents the yearning to know what happens. Marie wants to present the evidence from near-death experiences and is surprised that she meets with such resistance to her approach. And George knows more than he wants to. By the end of the film, we can't tell if their desires are realized, but we can hope they discover that there is peace in living with the Mystery.

Special features on the DVD include "Tsunami! Recreating a Disaster"; Hereafter's locations - casting the silent characters; and the Eastwood experience. 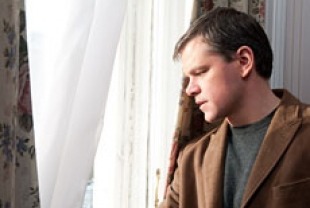 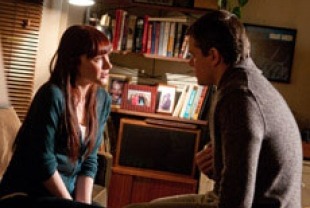 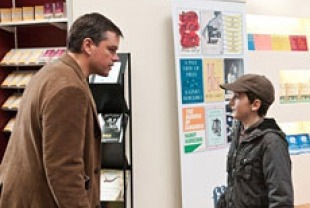 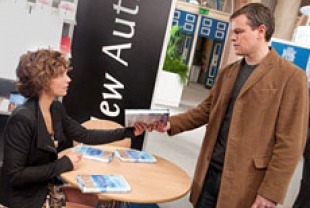