Client 9: The Rise and Fall of Eliot Spitzer

Directed by Alex Gibney
A thought-provoking documentary about what really lies behind the crash-and-burn of New York's former governor.

Oscar-winning documentarian Alex Gibney (Taxi to the Dark Side, Freakonomics, Enron: The Smartest Guys in the Room) is a highly skilled filmmaker who knows how to go behind the scenes of a large or sensational media story and present a fresh take on the subject. Here the event is the surprising and even shocking downfall of Eliot Spitzer, the Governor of New York and the crusading former attorney general who fought corruption in high places and angered many powerful people in the process. At the height of his career, Spitzer was even being talked about as presidential material.

Why would a man with such rigorous respect for ethics throw it all away for a $1,000-a-night escort from the Emperor's Club VIP, a company that offered its clients classy prostitutes? Spitzer admits to hubris and says, "You cave in to temptations in a way that seems easier or, in some twisted way less damaging." Was there more than a hint of self-destruction in his so blatantly breaking New York State law? We will never know for sure, but Gibney follows another path with his direction of the documentary: the examination of a conspiracy by Spitzer's formidable enemies who wanted to see him crash and burn.

Dubbed "The Sheriff of Wall Street" by the media, as attorney general Spitzer took on the impossible task of single-handedly reforming Wall Street and exposing widespread and egregious corporate abuse. Among those who felt personally attacked and wanted to make Spitzer's life miserable are Maurice "Hank" Greenberg, former chairman and CEO of AIG; venture capitalist Ken Langone, the New York Stock Exchange board director who orchestrated a $140 million compensation package for its chairman and CEO; and Roger Stone, who was hired by New York Republicans to bring Spitzer down through any dirty tricks he could muster.

Gibney sums up the major import of Client 9: The Rise and Fall of Eliot Spitzer: "Spitzer's story is so fascinating because it raises eternal questions that people will always have to reckon with: about infidelity, marriage, desire, pride, hypocrisy, self-destruction, vengeance, and corruption. We'll always have sex scandals in American politics because we live vicariously through the lives of the powerful and famous, but I think there is also a compelling need to really look at the line between what is a public crime and what is a private matter."

Special features on the DVD include a commentary with writer/director Alex Gibney; an interview with Gibney; a closed caption; additional interviews; deleted scenes; and "HDNet: A Look at Client 9. 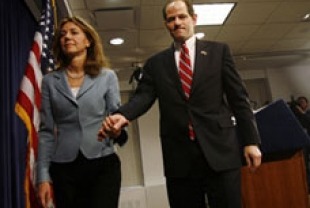