Directed by Alvaro Pastor, Antonio Naharro
The story of a lonely and accomplished young man with Down syndrome and his quest for normalcy and intimate love.

Daniel (Pablo Pineda) is a smart and personable young man who is 34 years old. He has Down syndrome and has taken it as his personal mission to break down some of the many barriers to his having what he calls "a normal life." His mother (Isabel Garcia Lorca) has done a remarkable job inspiring him to graduate from college with a major in educational psychology. His father (Pedro Alvarez Ossorio) has great respect for all that this son has achieved. They are both very proud to hear that that Daniel has landed a job at the General Office for Disabled Persons in Seville, Spain. But despite his accomplishments, this young man is lonely and jealous of his brother (Antonio Naharro), who is married and expecting his first child.

At the office, Daniel meets and falls in love with Laura (Lola Dueñas), a sexy blonde who loves to dance at clubs and then have one-night stands. Part of this addiction stems from a rift from her father and two brothers. Daniel's loving gaze endears him to Laura, and she connects to his spirit. They become friends, eating lunch together and even going to the beach. Meanwhile, Pedro (Daniel Parejo) and Luisa (Lourdes Naharro), two of Daniel's friends, who also have Down syndrome, have stirred up a hornet's nest at the dancing school program with their sexual moves. They are in love and resent being treated as children.

Co-directors Alvaro Pastor and Antonio Naharro have made an emotionally affecting and a thought-provoking film that reveals many of the major challenges faced by people with Down syndrome. It is a delight to see these men and women twirl, glide, twist, and whirl in dance class. It's liberating for them to be in touch with their bodies and to express themselves freely.

One of the reasons Daniel is so crazy about Laura is that she likes to break rules. After taking a brief trip to clear up the unfinished business in her family, Laura returns with a surprise for her tender, vulnerable, and loving friend who has stood by her even after being rejected and treated shabbily. Me, Too is carried by the top-drawer performances by Pablo Pineda, who has Down syndrome, and Lola Dueñas who has appeared in various Pedro Almodovar films including Talk to Me. 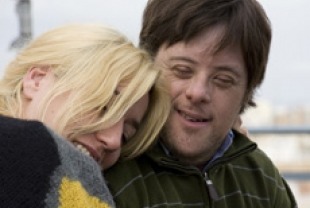