Directed by Byron Howard, Nathan Greno
A wonderful animated feature that salutes the power of healing, the spirit-lifting importance of light, and the transformative marvels of touch.

Let the applause begin for this impressive and spirited animated feature, Disney's first traditional fairy tale since the 1991 release of Beauty and the Beast. In a kingdom far away, the queen is saved from death by a flower with great medicinal powers. She passes these healing properties to her infant daughter. Mother Gothel (voiced by Donna Murphy) kidnaps the baby in order to gain access to her very own fountain of youth. She raises Rapunzel (Mandy Moore) in a tower and, over the years, watches her golden locks grow into a 70-foot-long train! Mother Gothel tries to brainwash Rapunzel about the evil, violence, and deceitful world outside. This perspective is delivered in the ballad "Mother Knows Best."

The girl's only companion is a chirping and blinking chameleon. Rapunzel's long blonde hair — the source of her healing powers — serves as Mother Gothel's means of climbing to the tower. The teenager's frustration is expressed in the song "When Will My Life Begin?"

For her entire life, Rapunzel has been dreaming about venturing out of the tower to see up-close-and-personal the floating lights in the sky that appear every year on her birthday. But to do so, she would have to step into the dangerous unknown world. Her chance arrives by surprise when Flynn Rider (Zachary Levi) climbs up into the tower in order to escape two bands of men chasing him. In his bag, this rowdy thief has a precious object which he has stolen. When Rapunzel locates that object, she cleverly comes up with a barter that will benefit them both: he can take her to watch the floating lights in exchange for the object in his bag. One of the most magical scenes in the film is when this imprisoned teenager delights in her senses as her feet first hit the earth. She savors the grass, the wind, and the water in a brook. However, her enchantment is dashed when the dastardly men in pursuit of Flynn show up. In addition, Mother Gothel is on the rampage.

Tangled is directed by Byron Howard and Nathan Greno and spiced with melodic, snappy songs by veteran composer Alan Menken and lyricist Glenn Slater. In various scenes, Rapunzel demonstrates her special healing powers which are connected with light. This is an ancient tradition and it still makes sense today. Add to the light references that her journey outside the tower is to see the hundreds of lanterns lit in the kingdom on her birthday. Sitting in a boat with Flynn, they watch the magnificent display and sing the ballad "I See the Light." Another impressive element is the white stallion who, at first, is a fierce enemy of Flynn, but after experiencing the healing touch and affection of Rapunzel, becomes an ally. Tangled includes an evil protagonist, but we salute the nurturing elements in the story which are salutary: the miracles of healing, the spirit-lifting importance of light, and the transformative marvels in touch and affection, especially in our relationships with animals. 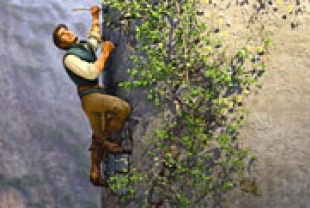 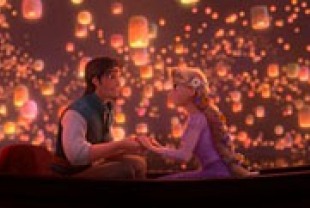