Directed by Miguel Arteta
A rollicking comedy about a sheltered and insecure 34-year-old Midwestern insurance agent whose life is transformed at an annual convention.

Tim Lippe (Ed Helms) is a 34-year-old insurance agent who has lived a sheltered life in Brown River, Wisconsin. When a charismatic colleague commits suicide, his boss (Stephen Root) decides to send him to the annual insurance convention in Cedar Rapids, Iowa. Tim is petrified since he has never left his hometown, flown on an airplane, or checked into a hotel. He is calmed down by Macy Vanderhei (Sigourney Weaver), his lover and former seventh grade teacher. But not even her caring ministrations can take away Tim's fear that he is not up to the assignment of bringing back the prestigious Two Diamonds Award his firm has won for three years running. He will be required to make a presentation to Orin Helgesson (Kurtwood Smith), the convention leader who is a conservative Christian.

Tim arrives in Cedar Rapids and is awed by the big city and the fancy hotel. His two roommates are Ronald Wilkes (Isiah Whitlock, Jr.), a friendly African-American who shows him the ropes, and Dean Ziegler (John C. Reilly), a brash loud-mouth whose main interest is having a good time. Joan Ostrowski-Fox (Anne Heche), a free-spirited insurance agent, shares the same intention. Tim's innocent and unassuming nature amuses all three of them, and they bond while drinking and going for a late-night swim. Tim and Joan team-up for a scavenger hunt. They win and are rewarded with a dinner at a Japanese restaurant. When she hears his reasons for choosing this career, she responds: "You realize you just made it sound cool to be an insurance agent."

Cedar Rapids is a rollicking coming-of-age comedy directed by Miguel Arteta who makes the most of Tim's uneasy entrance into the adult world of competition, causal sex without commitments, religious hypocrisy, and unethical dealings. Although at times this anti-hero seems goofy, he manages to win our affection and allegiance for his sturdy moral character and love of his work. He considers the insurance business to be a calling; it's the insurance companies, he says, who are there when people need someone they can trust during disasters and other dire situations.

One of the most delightful developments in this comedy is that his boss warns Tim to stay away from Dean Ziegler, saying that he might try to poach their clients. But the two of them, so very different personalities, hit it off and become friends during their adventures. Another surprise is the tender relationship between the shy insurance agent and Bree (Alia Shawkat), a prostitute who introduces him to her wild world of partying and drugs.

As with many spiritual dramas, Tim's close encounter with darkness and difficulty draws out the best in him and sends him back to Wisconsin a transformed young man ready to take his place as a leader in the community. 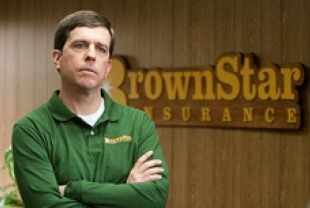 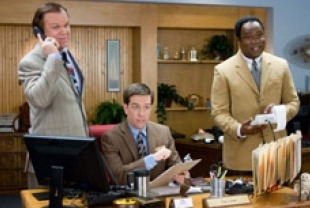 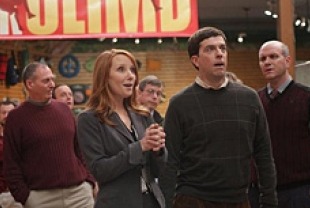