Of Gods and Men

Directed by Xavier Beauvois
A deeply human and spiritually enlightening French film about the mission of seven Catholic monks serving a poor Muslim community in Algeria.

In 1996, eight monks at the Cistercian Monastery of Our Lady of Atlas near the village of Tibhirine in Algeria lead lives of contemplation and community, love and discipline, meditation and action. They follow the Rule of Benedict and observe the "liturgy of the hours," gathering for prayer and chanting in their small chapel seven times a day. At other times, there are chores to be done: cooking in the kitchen, tending the vegetable garden, loading firewood for the monastery, making honey to be sold in the town’s marketplace, and keeping the place clean.

Christian (Lambert Wilson), the superior, is a scholarly man who is dedicated to the spiritual practice of compassion and well-versed in the Bible and the Qur'an. He leads the worship services and feels very close to the men in the community. Luc (Michael Lonsdale) is a doctor who serves the many men, women, and children in the neighboring Muslim town. Some days he has 150 people looking for help. But his medical supplies are limited, and his energy in old age is dwindling. When a young woman asks him about love he describes the states a person goes through and then confides in her that he has devoted his life to a higher love for God that has filled his heart and made him grateful for everything he has experienced.

The monks are shocked when they are told by their Muslim friends in town that Islamic fundamentalists have stabbed a woman to death because she was not wearing a veil. Shortly afterwards, the fundamentalists slit the throats of some foreign construction workers in the area. A representative from the Algerian government wants the monks to leave to avoid the spreading violence or at least to accept military protection. But Christian has no intention of abandoning the monastery or fleeing to save his life. He believes they were called to be where they are, serving the people. When he shares his feelings with the monks, they agree that every man should decide for himself and they will abide by a communal vote.

On Christmas Eve, a band of Islamic terrorists break into the monastery and demand medical supplies for their wounded comrades. The encounter between their leader (Farid Larbi) and Christian is very dramatic and clearly reveals the differences between the terrorist and the peaceful monk. They end their dialogue with a handshake. Later, in a meeting with a commander of the Algerian army, Christian is warned of the danger of collaborating with the Islamacists. There is no handshake at the end of their talk. The final piece of input comes from the leaders of the Tibhirine community who urge the monks to stay on because they are so helpful to their neighbors.

Of Gods and Men won the Grand Prize at the 63rd Cannes Film Festival and is the French entry for the Academy Award category of Best Foreign Language Film. Director Xavier Beauvois has made a deeply human and spiritually enlightening film about the events leading up to the kidnapping and murder of seven Catholic monks in Algeria in 1996.

It is fascinating to watch these disciplined believers wrestle with their consciences as to whether they will stay put or run in the face of certain death. As they prepare to vote on whether to leave or stay, their testimonies are inspiring: "We're martyrs out of love, out of fidelity." "Our mission is to be brothers to all. Love endures everything." "We had to resist the violence and we discovered what Christ calls us to: to be born again and again."

In the film’s most poignant moment, Brother Luc brings out two bottles of wine and puts on the phonograph player a recording of Swan Lake. As the monks celebrate their last moments together, they are filled with a bittersweet mixture of joy in their solidarity and sadness over the fate which lies ahead of them. The filmmaker moves from face to face, capturing the beauty of their individual souls and the deep bonds of their community. It is one of those transcendent moments in cinema where the spiritual qualities of believers shine brightly from their hearts to ours, leaving us with a vision of unforgettable radiance. 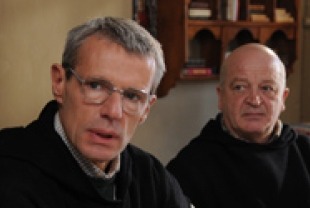 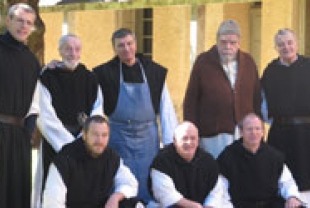 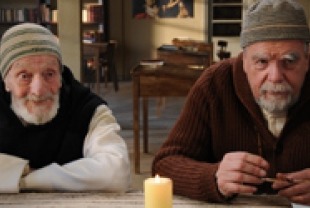 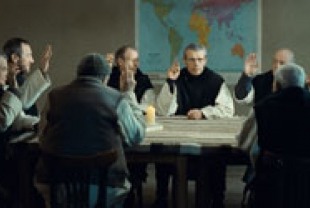 Interview with John Kiser on The Monks of Tibirine, the inspiration for this drama

Excerpts from the Screenplay