Rise of the Planet of the Apes

Directed by Rupert Wyatt
A sci-fi thriller that touches the heart and is sure to create many new and enthusiastic animal activists.

Animals rights activists have backed the Great Ape Project which focuses on the human qualities of apes, such as the ability to feel fear and happiness, create tools, use languages, remember the past, and plan for the future. Peter Singer, a Princeton ethicist, one of the project's directors, regards apes as part of a community of equals with humans.

In 2008, Spain approved resolutions that would give apes the right to life, liberty, and not be tortured. This was the first time any such legislation had been approved for non-humans. It made it illegal and punishable by law to keep apes for circuses, television, or filming. "This is a historic day in the struggle for animal rights and in defense of our evolutionary comrades which will doubtless go down in the history of humanity," said Pedro Pozas, the Spanish director of the Great Apes Project.

Will Rodman (James Franco ) is an intensely devoted genetic scientist working for Gen-Sys on a new drug called ALZ-112 which he hopes can be sold as a cure for Alzheimer's. The ape he is testing it on is improving in intelligence with no side effects. That is until she gives birth to a baby ape and exhibits wild and aggressive behavior at the lab. Will is ordered to shut down the project and to euthanize the 12 other apes involved in the experiments. Unable to kill the baby ape, he takes him home and names him Caesar.

Will lives with his father Charles (John Lithgow) who has Alzheimer's and is rapidly deteriorating mentally and physically. As the months pass, the scientist is astonished by Caesar's cognitive skills who quickly learns to sign, play chess, and use objects as tools as he romps around the house. He realizes that the ape is genetically different, having inherited the effects of the drug given his mother. He decides to test the new drug on his father with initially very good results.

Meanwhile, Caesar's vet, Caroline (Freida Pinto), becomes Will's girlfriend. Although she loves Caesar, she wonders if Will is not trying to control things that aren't meant to be controlled.

When Charles' immune system starts fighting the drug, his Alzheimer's comes back with a vengeance. He gets into an altercation with a neighbor and Caesar, now grown and very large, goes to his defense. This aggressive behavior results in a court order that the ape be taken to The Sanctuary, run by Landon (Brian Cox). It is really a prison for unwanted apes abandoned by their human companions. Caesar finds it hard to accept what has happened to him. He becomes a special target of hatred by Landon's son Dodge (Tom Felton) who enjoys tormenting and humiliating the apes.

When Caesar realizes that everything has changed for him, he decides to become the leader of the ape community. Through several demonstrations of his fearlessness and intelligence, he gains the support of Maurice, a huge orangutan; Rocket, a rough ape; and Buck, a fierce gorilla. Caesar remembers the ecstatic feelings of freedom he had while climbing ancient redwoods outside San Francisco. From the top of the Sanctuary, he also sees the city spread out before his eyes. Caesar rejects Will's belated bid to take him home and decides instead to lead a primate rebellion against the humans who have treated them so poorly.

Rise of the Planet of the Apes is an engrossing sci-fi thriller expertly directed by Rupert Wyatt who makes the most out of the bonds we form with Caesar and the adrenaline-pumping visual thrills of seeing him lead the attack on humans to secure the freedom of his band of apes. The computer-generated apes look real and are totally convincing as characters with personalities of their own.

By showing us what scientific experiments are like from the apes' point of view, the screenplay makes a convincing case against the practice of stealing chimps from their parents and using these intelligent animals as tools in the pursuit of higher corporate profits. Most painful of all is seeing the plight of these beings who are then abandoned to a horrific life of confinement, poor treatment, and mental and physical abuse.

Throughout the film, we found ourselves cheering for Caesar and taking his side in any difficulty — whether he was confronting Will's angry neighbor, the animal-hating keeper at the so-called Sanctuary, or the greed of the CEO of Gen Sys who sees apes as objects that can be used and then disposed of in the pursuit of profits. We were immensely moved by the portrait of Caesar and by the end saw him as kin. That is why we look forward to the day when the United States follows Spain's lead and approves human rights for apes. 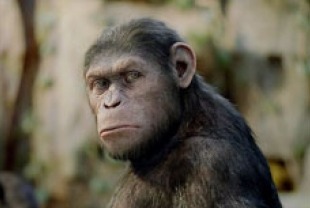 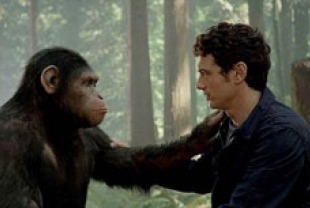 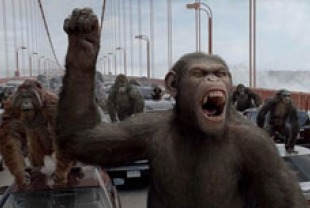 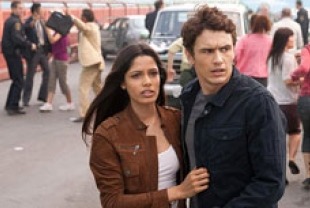 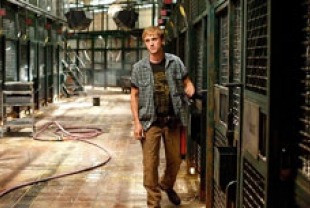 PG-13 – intense and frightening sequences of action and violence