The Kid with a Bike

Directed by Jean-Pierre Dardenne, Luc Dardenne
A salute to the art of empathy and the need to cultivate it in our approach to troubled kids on the fringe of society.

Jean-Pierre Dardenne and his brother Luc have directed a handful of raw and intense dramas about individuals on the fringe of society about whom no one cares whether they live or die. For the most part these angry or rebellious outsiders struggle to survive: they include the 15-year old boy in The Promise who comes of age in a bleak Belgian town; a 17-year old girl in Rosetta who scavenges for food and sells off clothing in a desperate attempt to stay alive; the 16-year old boy in The Son who has just been released from a juvenile detention center; a young man in The Child who attempts to sell his baby; and a young Albanian woman in Lorna's Silence who is weighed down by dire circumstances. The Dardenne brothers have written:

"The moral imagination or the capacity to put oneself in the place of another. That's a little bit of what our films demand of the spectator."

That same moral challenge is at work in The Kid With a Bike. Cyril (Thomas Doret) is an unruly and desperate teenager who is living in a boy's home. He wants to connect with his father but can't reach him by phone. After a bit of detective work, Cyril discovers that his dad moved out of his old place and even sold his son's favorite bike for some immediate cash. Cyril can't accept that he has been abandoned.

In a doctor's office, Samantha (Cecile de France), a sensitive and emotionally outgoing hairdresser, witnesses this troubled boy's cry for help in his wild behavior. She volunteers to let Cyril stay with her on weekends and the boy's home agrees. Samantha's first act of mercy is locating the boy's bike and then tracking down his father. The meeting with his dad depresses Cyril for he finally realizes there is no hope for them living together or sharing a future. Despite Samantha's kindness and attention to his needs, this angry teenager falls under the influence of Wes (Egon Di Mateo), a street-smart drug dealer. This leads to a close and unfriendly encounter with a bicycle thief and a newspaper vendor and his son.

The Kid With a Bike challenges us to identify with Cyril, a young boy who has a hard time facing the truth about his deadbeat dad or accepting Samantha's care and compassion. In these times when immigrants face incredible hatred, and when the poor and the unemployed are blamed for the economic morass, we need much more practice in the art of empathy. Religious writer Eric Kobell makes it clear why it is so hard to get into this spiritual practice:

"Empathy is risky business, which may be why we so often shy away from it. It's risky because when we extend ourselves to a person who is in pain we're allowing their condition to remind us of our own, remind us that what they are bearing is the human condition, and the inevitability to which we are all exposed."

The Boy With a Bike salutes one woman who proves to be skilled in empathy as she reaches out to an angry teenager with genuine love and openness.

Special features on the DVD include: Disc one: a trailer; Disc Two: a new conversation between film critic Kent Jones and directors Jean-Pierre and Luc Dardenne; an interview with actor Cécile de France; a new interview with actor Thomas Doret; Return to Seraing, a half-hour documentary in which the Dardennes revisit five locations from the film; and a booklet featuring an essay by critic Geoff Andrew. 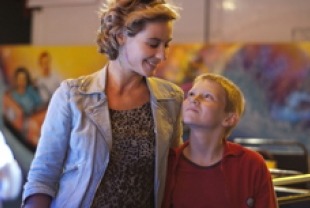 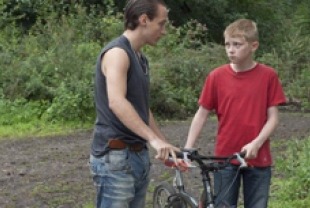