Directed by Ridley Scott
A combo science-fiction horror film and quest drama exploring the origin of our species.

"The first mystery is that there is a mystery. A mystery that can never be explained or understood. Only encountered from time to time. Nothing is obvious. Everything conceals something else."

The world is drenched with mystery and no matter what we do, we can never cut through it all and grab hold of the answer: the one explanation. The wise teachers in all the major religions and spiritual paths have challenged us all to remain open and reverent in the face of such daunting mysteries as the origin of the universe and the complexities of human nature. Reason and dogma come up short trying to answer these piercing questions. The mystics have it right.

"The eye goes blind,
when it only wants to see why."

Prometheus is set in the late 21st century. It is an ambitious sci-fi horror film directed by Ridley Scott. At the heart of the story is a quest to discover who created humans and how we got on Earth and if anyone else came with us. It is also a thriller which has been described as a scary prequel to Aliens, the 1979 flick starring Sigourney Weaver taking on a mutating band of vicious and yucky creatures. The serious side of Prometheus sets the stage for the bulk of the 3-D story which unspools once the spaceship lands on a faraway planet.

"We never catch up with reality itself. The real nature of mystery always evades our attempts to conceptualize it, and escapes the nets of our language and symbolism. Its depths are never plumbed."

Elizabeth Shaw (Noomi Rapace) and Charlie Holloway (Logan Marshall-Green) are enthusiastic archaeologists who stumble upon some ancient cave paintings that confirm that an alien race visited Earth thousands of years ago and were revered by the people here. Where did they come from, and were they our creators?

In order to solve the mysteries surrounding the origin of life on Earth, this romantically involved couple are given passage on Prometheus, a trillion-dollar spacecraft owned by Weyland Industries and the only vehicle capable of taking them to the small solar system they have determined is the logical home base of the aliens they are calling the "Engineers."

Meredith Vickers (Charlize Theron) is the arrogant and manipulative Weyland executive in command of the journey with 17 crew members including the ship's captain (Idris Elba) and various scientists. Overseeing the crew while they are all in hypersleep is David (Michael Fassbender), an android who has his own secret mission on this scientific journey to the home base of the aliens.

Once they land on this moon-like place, the two archaeologists and other members of the crew discover a temple filled with strange tubes that appear to be sweating and a giant monolith. Invading the sacred space of these aliens brings about a nasty and gruesome response by some slimy reptile-like beings.

"Our life is a faint tracing
on the surface of mystery."

The most interesting dimension of Prometheus is all the time, energy, and money put into the quest for scientific proof of the origin of humanity. Shaw hopes that the mission will prove, once and for all, that God (or Gods) created human beings. Her colleague and partner Charlie hopes that the expedition will prove another explanation. Both are seeking answers and are surprised by the aliens who have their own definitive response to these outsiders and their questions.

"Real faith means holding ourselves open to the unconditional mystery which we encounter in every sphere of our life which
cannot be compressed in any formula." 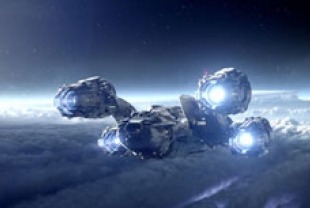 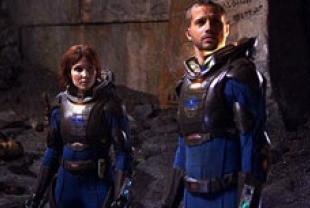 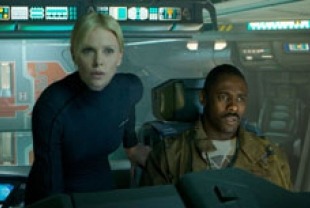 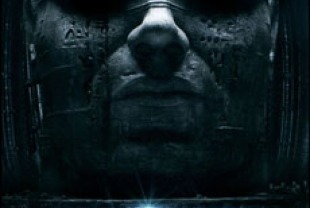 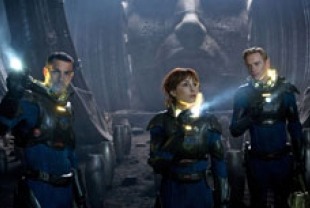 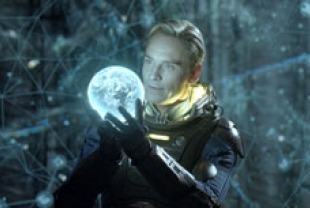