The Magic of Belle Isle

Directed by Rob Reiner
A spiritual film for all true believers in the power of love to transform lives.

Monte Wildhorn (Morgan Freeman) is a cantankerous writer who is taken by his patient nephew Henry (Kenan Thompson) to a peaceful cabin near a lake so the old man can relax for the summer. All he has to do is take care of the owner's dog. Wildhorn is still mourning the death of his wife and his confinement to a wheelchair after an accident.

The once prolific best-selling author of Westerns has a bad case of writer's block. It is heightened by his addiction to alcohol and his resentments about the bad hand he has been dealt in old age. These dark clouds are somewhat pushed aside one day when he hears the piano playing of Charlotte O'Neil (Virginia Madsen), the pretty widow who lives next door to him. She has three daughters: Willow (Madeline Carroll), a restless and angry teenager; Finnegan (Emma Fuhrmann), an independent young girl; and Flora (Nicolette Pierini), a little one who loves children's books. Wildhorn knows classical music and is mesmerized by his neighbor's special artistry.

However, the relationship that really affects him is the one that develops with young Finn who wants him to teach her how to be a storyteller. She rips away the armor he has been using to protect himself from troublesome and unpredictable emotions. The intimacy that develops between the crusty Wildhorn and the tomboyish teenager is quite touching. Her quest for ways to tap into her imagination ends up opening up her closed-down mentor. He is inspired to write a children's book about a playful elephant for Flora, a project that also stirs the heart of Mrs. O'Neil as she reads it to her daughter. Wildhorn's escape from his funk also involves his kind affirmation of Carl (Ash Christian), a mentally-retarded youth whom he initiates into the Wild West as "Diego Santana, desperado."

The Magic of Belle Isle is directed by Rob Reiner who has always had a knack for making the most out of character-driven movies (The Bucket List, When Harry Met Sally, Stand by Me). Here he has cast the perfect actor to play the depressed writer who is brought back into the land of the living by Mrs. O'Neil and her daughters. Morgan Freeman was born to play this role; he writes, and speaks, and acts as a writer would.

Although he is baffled by the emotions which overtake him, Wildhorn learns at last to, in the words of writer Robertson Davies, "be obedient to the promptings of his innermost heart." Here is a spiritual film for those who are true believers in the power of love to transform lives. 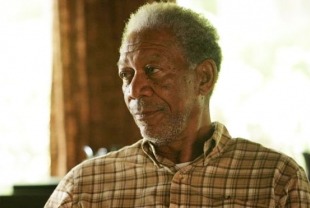 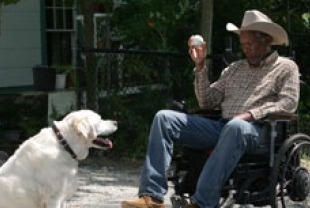 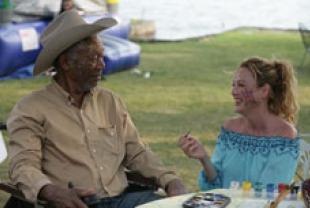