Directed by Alison Klayman
Top-drawer documentary about the art and activism of a Chinese artist who yearns for freedom.

In pursuit of his art and his love of freedom, artist and activist AI Weiwei has been a pain in the neck for Chinese authorities. When they have shut one door, he opens another like the clever and indomitable cat in the opening of this astonishing documentary directed by Alison Klayman. Winner of a Special Jury Prize at the 2012 Sundance Film Festival, it also was featured as the opening night selection for the Human Rights Watch Film Festival in 2012.

Ai Weiwei was born in China in 1957. During the Cultural Revolution in 1966 - 1967, he and his family were declared "class enemies" and were forced to do hard labor. His name restored after Mao's death, he went to the United States in 1981 to study and work.

He returned to his homeland in 1993 and curated a controversial exhibit including a series of photographs that show his extended middle-finger in front of Tiananmen Square and other places. Ai Weiwei achieved international fame after helping design Beijing's showpiece Bird's Nest Olympic Stadium but earned the ire of those in power by denouncing the games as political propaganda.

When the Chinese government refused to give access to those wanting to investigate the true impact of the 2008 earthquake, Ai Weiwei initiated the Sichuan Earthquake Names Project which posted the names of 5,000 student victims who lost their lives because of shoddy construction of schools.

After receiving treatment for a brain hemorrhage in 2009, he got a solo exhibition in Munich. "So Sorry" was the largest museum show dedicated to the artist's work to date. It included a work called "Remembering" which included an installation consisting of 9,000 backpacks spelling out the sentence "She lived happily on this earth for 7 years." The next year the inimitable artist created a master-work at London's Tate Gallery with 100-million hand-painted porcelain sunflower seeds made in a town in China. That same year

Klayman's portrait of Weiwei shows how he has made use of the social media to promote both his art and his activism. When his blog was shut-down by the authorities, he turned to Twitter (@aiww) and expanded his quest for more freedom in China.

In 2011, Weiwei spent 81 days in prison where he underwent psychological torture. After he was released, he was ordered to pay in back taxes and penalties a sum amounting to USD $2.4 million. Other restrictions were imposed on him but that did not stop Time Magazine from naming him as runner-up for "2011 Person of The Year." Klayman makes it clear that Weiwei will keep opening new creative doors in his quest for freedom. 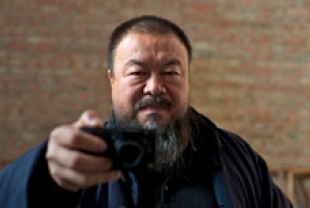 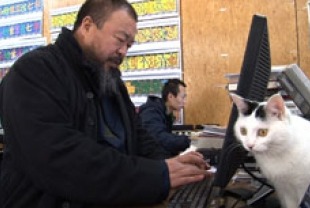 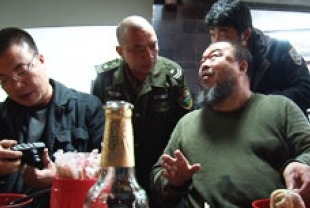 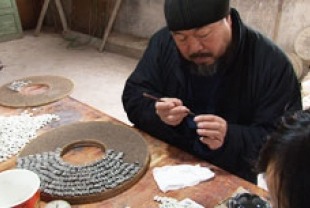 R - for some language