Directed by Ron Fricke
An enthralling documentary that becomes a guided meditation on the wheel of life and death.

"Out of life comes death,
and out of death, life.

Out of the young, the old,
and out of the old, the young.

Out of waking, sleep,
and out of sleep, waking.
The stream of creation and dissolution
never stops."
— Heraclitus in The Circle of Life

The Sanskrit word Samsara refers to the wheel of life, the cycle of birth, death, and rebirth. The term also embraces journeying in Buddhism and Hinduism. Both meanings are evident in this enthralling non-narrative documentary from director Ron Fricke and producer Mark Magidson.

Fricke and Magidson were the creative forces behind the extraordinary 1992 documentary Baraka, an unforgettable collection of snapshots from the global family album. With breathtaking cinematography and mesmerizing music, that film enabled us to see with our eyes and feel in our flesh the shared distress of Earth and humankind, so that we understood that that the healing of self and the healing of the planet are inextricably linked. Startling and beguiling images portrayed the vastness and variety of nature, city life, sacred sites, and religious rituals. We have seen Baraka many times over the years, and every viewing expands our awareness of the world and enables us to widen the circle of our compassion.

The same spiritual emphases are evident in Samsara which was shot over the course of five years in twenty-five countries on five continents. The filmmakers take us on a quest to a greater understanding and appreciation of the human condition and a reverence for the beauty and power of the natural world. And they help us face up to worldwide suffering, poverty, greed, violence, lust, and adoration of war and financial success.

In the midst of suffering and death, we discover that there are paths to rebirth or human transformation. With great respect for all the world's religions, the filmmakers deliver lavish and visually compelling images of devotional practices and rituals of Tibetan Buddhists, Christians, Jews, and Muslims.

Experiencing Samsara, we are challenged to leave behind our passive and isolated role of spectators and to step into the incredible energy streams of the wheel of life. For each of us, in our own way, is caught up in the cycles of life, death, and rebirth. And our journeys are connected to those of the people on the screen: we are rich and poor, happy and sad, hurried and at peace, open to change and locked in service to authoritarian leaders, filled with lust and dutifully spinning prayer wheels, searching for security and coming to terms with impermanence. Samsara shows us in no uncertain terms that the movements of creation and dissolution never stop.

EXISTENCE AS A CIRCLE

"The predominant world view shared by the majority of American Indian nations is that of the circularity of existence. It is a universe in which, as Black Elk put it, 'the Power of the world always works in a circle and everything tries to be round.' The cycle of the seasons, the circling of the sun and moon, even the round shapes of the nests of birds, are evidence of this. Just as every point on a circle is equal to every other point, no place being closer to the center than any other, all created things are regarded as being of equal importance. All things — not only humans and animals and plants, but even the winds, the waters, fire, and the stones — are living and sentient. Further, just as the strands of a spider web are so interconnected that touching one makes all the others tremble, in that circular universe everything is connected to everything else."
— Joseph Bruchac in Our Stories Remember

Circles seems to show up everywhere when we are on a spiritual journey. In Samsara we watch a group of Tibetan monks working on a circular sand mandala. In the beginning of the film, we see their intricate work pouring colored streams of sand to make the mandala; at the end, we are witnesses to its destruction. The poignant message of these scenes is about the beauty, fragility, and impermanence of life. We must live in the present moment and savor its possibilities.

We spin the circular prayer wheels with young monks in a Tibetan monastery to send our compassion out to the world. Who is in need?

Can we draw closer to these souls who are our equals in the circle of life?

TAKE NOTICE OF THE WONDERS 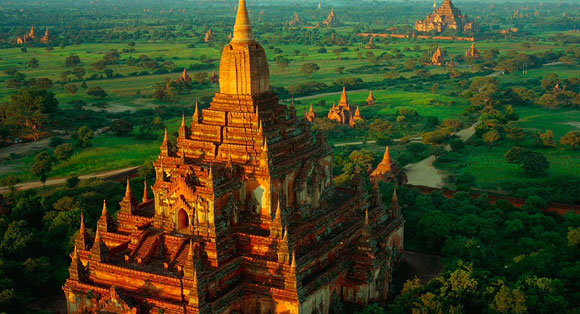 "To pray is to take notice of the wonder, to regain a sense of the mystery that animates all beings, the divine margin of all our attainments."
— Abraham Joshua Heschel quoted in Spiritual Literacy by Frederic and Mary Ann Brussat

One of the joys of the human adventure is taking in the beauty and the majesty of the world around us. Samsara is a sense-luscious film that embraces many of the most stunning places on the planet. This documentary turns us into wanderers on the lookout for new wonders; we understand why D. H. Lawrence declared wonder to be the sixth sense, a religious sense.

Samsara unfolds without narration, so it gives us plenty of space to make it into our own guided meditation and prayer. Let the following images stir your senses and your souls:

Make it your prayer to really notice these wonders, and see what happens.

A YEN FOR WAR

"The history of our species has been defined in large part by war. We see the great warrior traditions in nearly every civilization. If the warrior is an instinctual energy form, then it is here to stay. And it pays to face it."
— Robert Moore in Warrior

The winds of war are pervasive in these uneasy times. The filmmakers see no reason to ignore this world-wide propensity for arms, violence, hatred, and war. We see:

All these are signs of the dehumanization that feeds conflict. Each of us bears responsibility for being part of the system that allows and even encourages the warrior spirit over peace.

More images reveal a pervasive indifference to the poor and a lack of respect for anything. The gap between the rich and the poor is obvious as penthouses with their own swimming pools are contrasted with scenes of children sitting on bricks in garbage strewn houses. Workers are forced to carry back-breaking loads at a sulphur mine while others do mindless and repetitive work in huge factories. And when people are not respected, the disgusting and inhumane treatment of chickens and pigs in factory farms comes as no surprise. Even our beloved cars, pictured on busy Los Angeles highways, get no respect as they end their days being smashed into a slab of junk.

Perhaps the most surprising sequence in Samsara is Olivier De Sagazan's improvised act as an employee in a business suit seated at his desk who suddenly is seized by primal and crazy urges to let the wild man inside of him loose. Using clay and dirt and paint, he descends into a miasma of violence, anger, despair, darkness, and futility. It is a mesmerizing depiction of the shadow within all us, comprised of the things we hide and don't want anyone else to see.

THE MANY KINDS OF SPIRITUAL DEVOTION

"Devotion takes many forms: the solemnity and joy of prayer; the ecstasy of song, poetry, or art; the intimate connection between individuals in marriage, family, or community. It involves opening the heart fully to the presence of love and beauty, which brings compassionate and reverent awareness of the Divine in all things. Through the lens of devotion, every aspect of creation is seen as purposeful, and hence received in gratitude."
— Lavira Dasin in Opening the Inner Gates

Samsara is a guided meditation on life and death, but it doesn't stop there. It also presents the factors and forces which can lead to rebirth and personal transformation. The filmmakers put before us a thought-provoking mix of devotional rituals and practices which spur us on to new life. Here are a few to take to heart:

Samsara is not only a visual masterwork; it also has an incredible musical score by Michael Stearns, Lisa Gerrard, and Marcello de Francisci comprised of many different types of devotional music, religious and spiritual chants, and meditative orchestrations.

With its guided meditations, its visual variety and beauty, its spiritual and religious messages, its celebration of the natural world, its critique of war and all the factors that fuel hatred and violence, and its subtle efforts to help us see our oneness with the human family and the whole of creations, Samsara is in itself a profound spiritual experience. It is not only one of the best films of 2012; it is a film you will treasure for all your life.

Special features on the DVD include filmmaker interviews; behind the scenes; and trailers.

PG-13 - some disturbing and sexual images