Directed by Stephen Daldry
The whimsical and inspiring tale about a boy growing up in an English mining town who yearns to become a ballet dancer.

A great Sufi seer, Khawwas, once noted: "All wisdom can be stated in two lines: What is done for you — allow it to be done. What you must do for yourself — make sure you do it." The aspiration to become our best self and all we were meant to be is spurred onward by the support of others who believe in us and, ultimately, by our own soul. Sometimes it takes a long time to hear the great chiming within. And often we wonder whether others will ever give us their encouragement as a true blessing. These themes are played out beautifully in one of the most spiritually literate films of 2000, Billy Elliot, set in a Duram County mining town in England during 1984.

Eleven-year-old Billy Elliot (Jamie Bell) is growing up without a mother. His father (Gary Lewis) and older brother Tony (Jamie Draven) are miners filled with rage against management and scabs during a strike. Billy's dad wants to toughen up his son so he forces him to attend a boxing class. But the boy's heart is drawn to a ballet class being taught by Mrs. Wilkinson (Julia Walters) whose daughter (Nicola Blackwell) catches his eye. Billy has a natural talent and begins to use it as a creative outlet for all the mixed feelings of anger, loss, and yearning stirring in his adolescent soul.

However, when his machismo father finds out that his son has taken up ballet, he pulls him out of the class and orders him to stay at home with his grandmother (Joan Heywood). But Billy secretly takes classes with Mrs. Wilkinson who wants him to audition for the Royal Ballet School in London. The only one he tells is his best friend Michael (Stuart Wells) who's just coming to terms with his own homosexuality.

Billy Elliot marks the directorial debut of the Royal Court Theatre artistic director Stephen Daldry. He draws out top-of-the-line performances from Jamie Bell, Julia Walters, and Gary Lewis. The latter's portrait of the father is especially convincing and emotional given the man's initial prejudice against ballet. But when he realizes that this is Billy's passion and a way for him to escape the mining community with its uncertain future, he sticks his neck out to make it possible for his son to make the London audition.

In one of the film's most poignant moments, Billy shares a treasured letter with Mrs. Wilkinson that his mother wrote just before she died: "Always be yourself. I love you forever." The African-American theologian Howard Thurman used to say to his friends and favorite students: "Follow the grain in your own wood." That's just what this wonderful movie is all about. 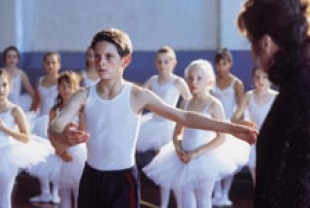