Directed by David Gordon Green
An extraordinary film about a band of poor African-American kids who struggle to keep their souls alive in a terrible and toxic environment.

Soul is not something we can see or measure. The best we can do is watch for its outward manifestations in tears and laughter, in courage and heroism, in generosity and forgiveness. This large-heartedness is often seen in poor people.

Take, for instance, the small band of African-American boys and their one white tomboy girl friend in this story. They live in a small southern town that looks like a hurricane ripped through it. Nothing has been repaired — dilapidated buildings stand empty, refuse and junk litters the landscape. This is the playground for these kids who come from families where there's never enough to eat.

Nasia (Candace Evanofski), the 12-year-old narrator, says that she and her friends are trying "to find clues to all the mysteries and mistakes God has made." Not a bad description for the odyssey we all are taking in a world filled with violence, nastiness, and the sweet surprises of grace. Nasia has just broken up with her boyfriend Buddy (Curtis Cotton, III) because she feels he is too immature for her. He's a nice boy who sings his mother to sleep every night.

Nasia focuses her attention on George (Donald Holden), a quiet teenager who is vulnerable to injury because his skull never properly hardened after birth. He has to wear a football helmet to protect himself.

George and his little sister live with their Uncle Damascus (Eddie Rouse), an angry man who has just been fired from his job with the railroad. Sadly for George, he doesn't like the sickly dog that the boy has taken in and is nurturing with tender care.

While these kids are roughhousing in an abandoned public toilet, there is an accident that results in the death of one of them. This creates a gnawing sense of guilt in Vernon (Damian Jewan Lee), confusion in Sonya (Rachael Handy), but eventually propels George to an heroic act at the local swimming pool.

George Washington is an offbeat and endearing film written and directed by David Gordon Green. Without patronizing or sentimentalizing these poor African Americans, he shows how they manage to keep their souls alive in a terrible and toxic environment. Nasia celebrates her new boyfriend by calling him George Washington. She hopes he will live forever. His heart is certainly in the right place. Perhaps that should be a major criterion for defining heroism in these cynical times. 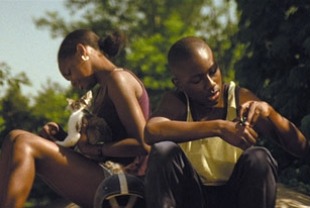