When the Iron Bird Flies: Tibetan Buddhism Arrives in the West

Directed by Victress Hitchcock
An invaluable history of the spread of Tibetan Buddhism to the West and its continuing evolution.

Since the Chinese invasion of Tibet in the 1950s, the courageous and devout Tibetan people have witnessed the savaging of their religion, language, and culture. As Robert Thurman has pointed out, the Tibetans see their cherished tradition of Buddhism as a "wish-fulfilling tree" with its capacity to bring bliss and enlightenment to all who hear and take to heart its teachings.

When the Iron Bird Flies: Tibetan Buddhism Arrives in the West provides a rich and robust overview of the resilience and flourishing powers of this religion. The title comes from an ancient Tibetan prophecy that states: "When the iron bird flies, the Dharma will reach the West." Director Victress Hitchcock (Blessing: The Tsoknyi Nangchen Nuns of Tibet) has gathered a group of gifted and impressive Buddhists to comment on the adventures of Tibetan teachers in western countries, including the pioneering work of Chogyam Trungpa, founder of the Naropa Institute. Appearing on screen are His Holiness the Dalai Lama, Dzigar Kongtrul Rinpoche, Reginald Ray, Elizabeth Mattis-Namgyal and others.

Among the watersheds in the evolution of the Dharma in the West are the establishment of the College for Tibetan Studies in India to translate ancient manuscripts; the creation of the Mind & Life Institute to extend the teachings of the Dalai Lama to other cultures; the dialogue between Tibetan monks and scientists interested in the brain; the work of a former drug smuggler who is now a wise Tibetan spiritual teacher in prison; and the breakthrough work of a Buddhist nun who became the first woman to receive a prestigious Geshe degree in Tibetan studies.

It is with deep pleasure that we watch this glorious documentary unfold with its affirmation of the efforts of Tibetan teachers to make this religion relevant to the needs and concerns of Westerners. When the Iron Bird Flies is a creative and wide-ranging guide to the spread of a rich spiritual tradition. It's an invaluable resource to newcomers and seasoned devotees of Tibetan Buddhism. 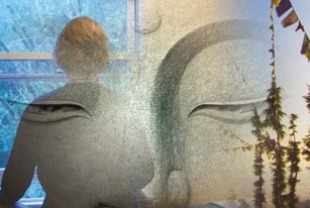