Directed by Michael McGowan
Proof positive that long-lived individuals possess the resilience to handle anything and everything that life throws at them.

Craig (James Cromwell) and Irene (Genevieve Bujold) have been married 61 years and have seven grown-up children. They live in a run-down farmhouse on a stretch of the Canadian coastline in New Brunswick where they make a modest living. But they have hit a patch of bad luck and things seem to be going from bad to worse. After their cows break through the fencing, Craig decides to sell them. Then he learns that he can no longer sell his strawberries unless he gets a refrigerated truck. Even though they have a bumper crop, he and Irene have to give away all the berries.

But their biggest challenge is Irene's short-term memory loss. She can vividly recall scenes from their courtship and the sting of his adultery years ago but in the present she loses track of where she is and occasionally zones out completely. Whereas their son and daughter think it would be best to put her in a nursing home, Craig and Irene are both against it. Even though he is 88 years old, this stubborn old man resolves to build a new house for them with views of the bay. It will be smaller and easier for Irene since she can no longer negotiate stairs.

Always an independent and optimistic person, Craig is energized by this ambitious new project. But he runs into problems with a by-the-book local building inspector, Rick (Jonathan Potts), who orders him to purchase a building permit and then to submit plans for the house. Craig has been building all his life, having been taught by his father, and he finds all these rules and regulations irritating. But he complies as best he can and plunges ahead, only to be served with a stop-work order. The lumber he has used is not stamped with the appropriate seal and some of his building techniques are not considered up to code. He argues that the little house is sound, but the inspector threatens to bulldoze it down to the ground.

Still Mine is another splendid drama about the challenges and rewards of conscious aging. This Canadian film written and directed by Michael McGowan is a love story that touches the heart with its uplifting portrait of a couple enduring a storm of troubles with fearlessness, courage, and mutual support. We recall how much we were moved by this director's film Saint Ralph (2005) about a boy who takes on a big challenge in hopes of receiving in exchange a miracle cure for his mother who is in a coma.

James Cromwell gives a tour de force performance as Craig, an incredibly energetic and loving man who is willing to do whatever it takes to ease his wife's pain and suffering. We learn of his generosity to one of his sons, John (Rick Roberts), to a crusty old friend Chester (George R. Robertson), and to the lawyer Gary (Campbell Scott) who takes his case when he must appear in court for building violations. Cromwell conveys the character's special brand of pride and whimsy in a speech to the judge about dignity; he reveals his tenderness to Irene in several scenes of romantic intimacy with her; and in one of the most telling sequences in the film he pays tribute to the table he crafted as a young man and marvels at its wabi sabi blend of beauty and imperfection.

Cromwell is given ample support by Genevieve Bujold's wonderful performance as his wife Irene who struggles bravely with her dementia and her physical decline. One can see this character's youthful charm in her eyes and the yearning she has to keep things the same as they have always been.

Still Mine offers us proof that long-lived individuals can find within themselves the strength, optimism, and determination to triumph over whatever life throws their way. 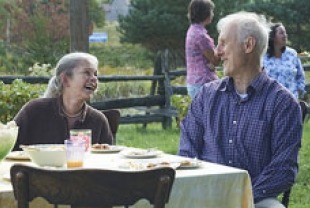 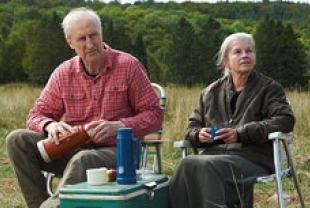 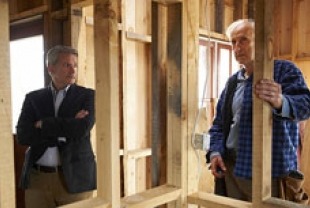 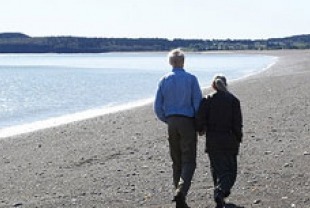