Directed by David Mamet
An acerbic comedy by David Mamet set in a small New England town where some ethically challenged filmmakers are shooting a movie about the search for purity.

One of the major causes of moral decline in our society is the failure of so many individuals to make a habit of thinking in ethical terms. As the saying goes, it is not that people are "immoral," it's that they are "amoral." An indifference to questions of right and wrong and the whys and wherefores of good conduct means that over time men and women become desensitized to their values.

State and Main is an acerbic new comedy by the prolific writer and director David Mamet that explores the genesis of all our ethics — our personal relationships with others in the context of community. The setting is the picturesque New England town of Waterford, Vermont, which is chosen as the location for a big budget Hollywood film called The Old Mill. Ordinary life in the small community comes to a halt and suddenly everyone is very busy. The hotel tries to accommodate the cast of stars and the production crew; the diner begins serving exotic food and transforming regular tap water into expensive bottled water; the citizens are seen reading Variety; and the mayor's wife (Patti LuPone) embarks on a frenzied renovation of their house to make it historically accurate for a large dinner party the mayor (Charles Durning) sets up for the Hollywood bigwigs.

The first challenge faced by director Walt Price (William H. Macy) is what to do when he learns that the town's old mill burned down in 1960. He informs the writer, Joe White (Philip Seymour Hoffman), that he must pull this central location out of the script. Ann (Rebecca Pidgeon), the proprietor of a bookstore and head of an amateur theater troupe, becomes his creative ally. She is so taken with him that she breaks off her engagement to Doug MacKenzie (Clark Gregg), an ambitious politician who has hopes of eventually running for Congress.

At one point, when Price is accused of lying, he responds: "It's not a lie. It's a gift for fiction." This is the slippery slope on which most members of the film company can be found. When Bob Barrenger (Alec Baldwin), a superstar in the movie, gets involved with Carla (Julia Stiles), a local teenager, he justifies his fondness for underage females with "everybody needs a hobby." The most ethically irresponsible character is Marty Rossen (David Paymer), an egocentric, power-hungry producer who puts Claire Wellesley (Sarah Jessica Parker), the film's star, in her place when she balks at performing a previously agreed-to topless scene. He also terrorizes MacKenzie when he tries to bring a lawsuit against the production company. And after that fails, Rossen comes up with a solution used behind the scenes in Washington, D.C. for years.

One of the most appealing characters in State and Main is Joe White, the first-time screenplay writer who sees his movie as dealing with "the search for purity." He has his own golden opportunity to take an ethical stand thanks to a gracious act of intervention by Ann.

Mamet uses comedy as a mirror to show us how flawed and full of foibles we all are in this era when the entertainment industry colors so much of our lives. The drama is filled with zippy one-liners on everything from the definition of fun to the absurdity of the electoral college. By all means don't miss the hilarious surprises and spoofs contained in the closing credits — especially the bits on associate producers. State and Main contains the best ensemble performances of the year 2000. 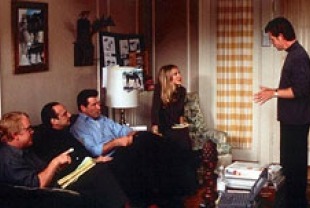