The Wolf of Wall Street

Directed by Martin Scorsese
An over-the-top portrait of a cynical head of brokerage firm which vividly shows the soul rot afoot in America.

Jordan Belfort (Leonardo De Caprio) lands a job at a prestigious New York City trading firm as a "connector" (a phone dialer for traders). He is immediately taken under the wings of an unscrupulous and wildly successful senior broker Mark Hanna (Matthew McConaughey) who senses this handsome and eager young man's craving for wealth, power, and being a winner. In a three martini lunch capped off by cocaine, Belfort is initiated into the kingdom of getting ahead and looking out for number one where the Wall Street crowd are busily making tons of money while average people are struggling just to survive and pay their bills.

Black Monday in October 1987 briefly derails Belfort's selfish dreams, but before long he takes up a new challenge at a storefront brokerage firm in a Long Island strip mall. The ragtag band of traders there deal in penny stocks. Belfort impresses everyone with his smooth telephone pitches and soon has a little band of loyal disciples. With their gospel of greed, they have no qualms about screwing money out of people who have very little of it and are desperate to save their homes from foreclosure.

In a sign of the moral disarray of the times, a hatchet job attack on Belfort in Forbes Magazine works in his favor and suddenly there are swarms of young stockbrokers begging to work for his new firm, Stratton Oakmont. Donnie Azoff (Jonah Hill) becomes his right-hand man and shares his addiction to coke. As the firm makes more and more money, Belfort's wealth grows and his extravagance knows no limits.

After divorcing his first wife who becomes fed up with his womanizing, he marries Nadine Naomi (Margot Robbie), who serves as an attractive showpiece prop in his expanding kingdom. But being married doesn't affect his sexual addiction. Prostitutes are happy for all the work he gives them at staff parties. At one of these celebrations, dwarves are thrown against a target in an office contest. There is no end to the excesses of this narcissistic, crude, foul-mouthed, and immoral man.

The Wolf of Wall Street, directed by Martin Scorsese, is based on Jordan Belfort's memoir. The only value in seeing or even commenting on this film is that it reveals the shadow side of the American financial industry, detailing all the dark, selfish, perverted and amoral aspects of the linchpin of the American economy.

"Cynicism" says Matthew Perryman Jones, "is nothing more than soul rot." This film from start to finish is a prime example of the cynicism afoot in the culture. Scorsese has created a Petri dish in which we can see the growing arrogance and elitism of the rich and the powerful, the brutal looking out for number one, the rampant misogyny, the drug and sex addiction that is a sign of self-hatred, the insane speed of life, the bully mentality that likes hurting others, the disdain for hard work, and the indifference to the need for a more just world.

Martin Scorcese has directed many over-the-top movies but this one takes the prize for its excessiveness. Everything about it is overdone. In addition, Scorsese and screenplay writer Terence Winter do not make any judgments on Belfort's actions. In reality, this slick wheeler dealer swindled investors (whom he calls "garbage" in the film) out of more than $100 million. The only person in the drama to grasp the enormity of hurt and malevolence being perpetrated by Belfort is FBI agent Patrick Denham (Kyle Chandler). But even his dogged determination to put him in prison and throw away the key is trumped by the criminal justice system where rich people are given a country-club like place for their usually abbreviated prison sentences.

Perhaps the ultimate cynicism of The Wolf of Wall Street comes when we learn in an end note that Belfort has re-invented himself and gone on to continue making money as a motivational speaker. The notoriety he will gain from the film, like the earlier Forbes article, is likely to bring him even more disciples!

Already this film is being cited as an awards contender for 2013. The Hollywood Foreign Press Association nominated it for a Golden Globe award in the "Comedy" division. We take it they think what Belfort did (read about his victims here) and his life of multiple and extreme addictions is funny. We find the idea of Belfort laughing all the way to the bank, and audiences laughing with him and about him, to be excessively cynical. To add insult to injury, those who buy tickets to The Wolf of Wall Street will give him even more fame and glory! Only in America!

Special feature on the Blu-Ray/DVD is The Wolf Pack: an examination of Martin Scorsese's take on the story, Jordan Belfort's life, and character portrayals and improvisations. 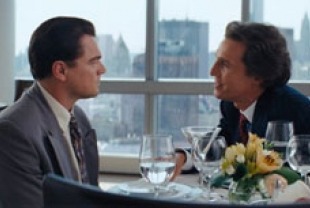 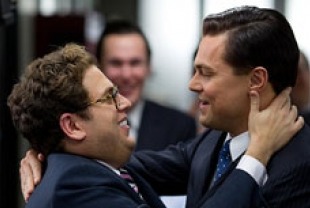 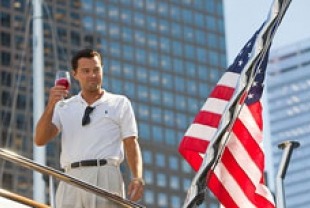 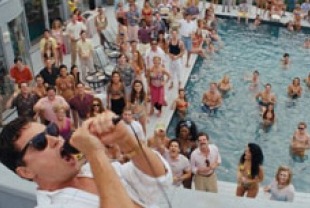