This morally compelling film tells the true story of seven men who left their work to volunteer for a little known World War II U.S. Army Unit. Their task was to find and protect monuments and art during bombing and other war campaigns. As the war drew to a close, their mission turned into a treasure hunt to discover where the Nazis had stored stolen art.

These heroic men were called the Monuments Men. Only recently did the National Endowment for the Humanities present them with a medal given to groups whose work "deepened the nation's understanding of the humanities." That alone is reason to savor this robust film about their courage and creativity.

Their leader is Frank Stokes (George Clooney), a Harvard art historian whose love and respect for great art animates him to hunt for looted paintings and sculpture pieces. He is determined to preserve the culture and way of life these artistic accomplishments represent. He is particularly obsessed with locating the Madonna and Child, carved by Michelangelo and known as the "Bruges Madonna" that stood in the Church of Our Lady in Bruges, Belgium, until the Nazis stole it.

Stokes chooses six men to work with him on this dangerous mission: a curator of medieval art at the Metropolitan Museum (Matt Damon); a sculptor (John Goodman); a British art connoisseur (Hugh Bonneville); an architect (Bill Murray); a French art dealer (Jean Dujardin); and a historian (Bob Balaban). They learn that Adolf Hitler, a lover of art who attended an art school, plans to build a huge "Fuhrer Museum" and has ordered his troops to collect the greatest paintings and statues from European museums and private collections. Thousands of pieces have disappeared, including the Ghent Altarpiece.

The Monuments Men are helped by Claire Simone (Cate Blanchett), a Resistance fighter who worked as a secretary for the German command in Paris, often visited by Hermann Goring, and secretly made a list of the every work of stolen art sent to Germany. Her notes save the Monuments time when it is most needed; as war's end they learn that the Germans have been ordered to destroy the art rather than let it be returned and the Russians want to collect it for their museums.

George Clooney proves with The Monuments Men that his ample gifts as a director were no fluke in Good Night, and Good Luck. He takes a great story and makes a rousing movie out of it with a versatile cast of acting veterans. It covers an interesting period that many people know little about. It gives us side glimpses into the camaraderie among the men. There are chases and suspenseful filled searches. And there's even humor. Claire and others in France keep asking Damon's character to stop speaking French, and the subtitles reveal his lack of skill in this language.

Although Clooney may not have intended to do so, he has made a drama which shows us the elevated feeling that comes to the surface when we experience awe. Art can do that to people of all ages when beauty and wonder combine to create goose bumps. To stand in the presence of a work by Michelangelo, Vermeer, or Rembrandt is to be awestruck by the ineffable. Clooney and company share this peak experience several times in The Monuments Men, and their reverence is contagious.

Special features on the Blu-Ray/DVD include George Clooney's Mission; Marshalling the troops; Blu-ray exclusives; Deleted scenes; In their own words; A woman amongst the Monuments Men. 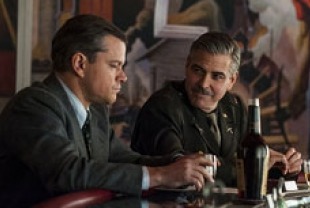 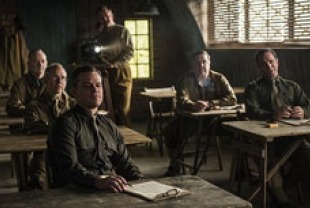 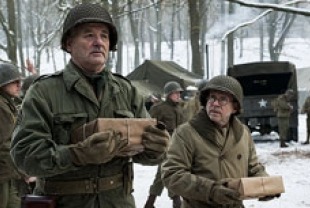 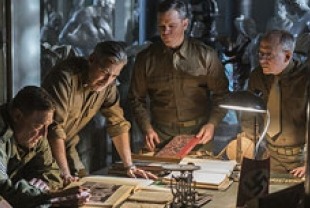 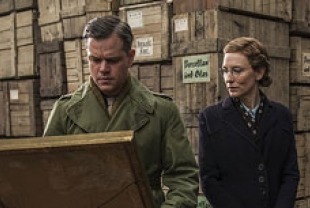