Directed by Nicholas Stoller
A madcap comic extravaganza revolving around a feud between a suburban couple and the fraternity next door.

A recent report issued by the Pew Research Center found that only 43 percent of Americans know all or most of their neighbors by name, 29 percent know some, and 28 percent know none. Yet many of these same people have thousands of "friends" or "followers" on social networking websites. As a result, social media users are less likely to turn to their neighbors for companionship. The upshot of this research is that we are shifting our definitions of what we mean by neighbors and community.

This new way of regarding those who live next door or in close proximity to us forms the backdrop to the madcap and outrageously funny comedy Neighbors. Mac (Seth Rogen) and Kelly (Rose Byrne) have just moved into suburbia with their infant daughter. Besides adoring their new child, this couple don't want to lose the wildness they associate with their youth. So they vow to have sex outside the bedroom but Mac just can't pull it off with the baby looking at them.

The Delta Si president, Teddy Sanders (Zac Efron), invites them inside, and the couple stay up all night getting smashed and stoned. But the good will between them evaporates the next night when noise from the fraternity begins. After the police are called, any hopes for a peaceful resolution between the old fogies and the rowdy youth vanishes. Mac and Kelly initiate a series of attacks including breaking a pipe on the fraternity house which causes a flood, a divide-and-conquer ploy whereby Kelly convinces Teddy's best friend (Dave Franco) to sleep with his girlfriend, and a final all-out strategy to get the house closed down by the university's dean (Lisa Kudrow).

Director Nicholas Stoller orchestrates this highly energized comic extravaganza with one joke, slapstick sequence, satirical barb, and trench-mouthed rant after another. Many of these work and some fall flat but they all contribute in their own special ways to Mac and Kelly's transition to adulthood. We are used to seeing Seth Rogen dominate a series of comedies with his Peter Pan refusal to grow up but in this drama there is even a bedtime salutation to the things that make for maturity. It is a pleasure to watch Rose Byrne (Bridesmaids) deliver another top-notch comic performance and to see Zac Efron win our allegiance with his rounded portrait of the fraternity president with an impossible mission. We also enjoyed the finale where two of the rivals in the feud tear down the walls that divided them in the past.

Special features on the Blu-Ray/DVD include an alternate opening; deleted/alternate scenes; on the set with; bonus features; gag reel; The Frat; an unlikely pair; line-o-rama; and partying with the neighbors. 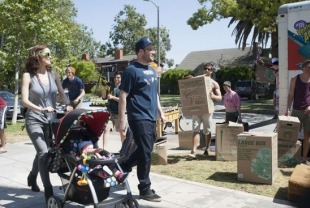 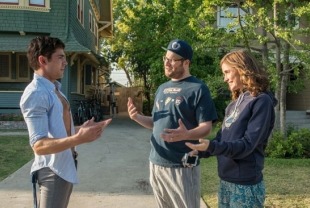 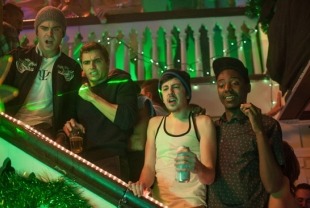 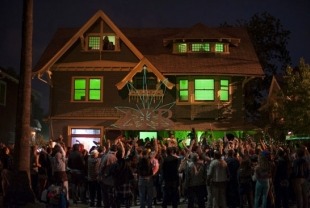