Directed by Eric Merola
Portrait of a thoughtful, articulate, and courageous whistle-blower.

"There is a higher court than the courts of justice and that is the court of conscience. It supersedes all other courts."
— Mohandas Gandhi

Whistle-blowers are those people who want to do the right thing and speak the truth. It takes immense reserves of patience, courage, and discipline to do battle with corrupt corporations, powerful organizations, and malevolent institutions. Whistle-blowers are tested every day to see where they stand and which way their project is going. They will undergo periods of doubt and dismay and be overcome by setbacks.

It is important for whistle-blowers to have other crusaders on their side but may times, they may feel that only their spouses can give them the moral support and encouragement they need to keep pushing on no matter what the challenge.

The internationally award-winning film maker Eric Merola has made an enlightening documentary about Ralph W. Moss, a science writer who blew the whistle on the cover-up of a promising cancer therapy by the prestigious Memorial Sloan-Kettering Cancer Center (MSCC) during the 1970s. The film's director has provided us with an opportunity to take an up-close-and-personal look at what it takes to be a whistle-blower in a country where far too many people still trust large and dynamic corporations, research centers, and organizations to do the right thing and to be honest and fair. There are three stages in this whistle-blower's journey.

The Whistle-Blower believes in values that give life meaning. Moss is an idealist who graduates from Stanford and cannot believe his good fortune when he is hired by MSCC in 1974 to present to the American public the center's part in the War on Cancer. Moss meets with Dr. Kanematsu Sugiura, one of the center's leading research scientists and learns that he has done research on the use of Laetrile, believed by many scientists to be a "quack remedy." But this veteran researcher has proof that this unconventional drug has had positive results in mice with cancer.

The Whistleblower struggles with what to do. Moss shares this news with his superiors and is stunned to hear their denials and resistance to Sugiura's research. Soon Moss becomes very stressed out since he loves his job and yet finds himself ordered to keep the truth about Laetrile quiet. This conflicted whistle-blower suddenly find himself on a roller-coaster ride as he leaks documents to the press, tries to collaborate with a John Birch Society outfit, and finally starts his own newsletter — "Second Opinion."

The Whistleblower gives up his belief in a fair and equitable system. It is Moss's 10-year old son who tells him: "Dad, you can't work for them and against them forever." He chooses to speak out against MSCC in public and is fired. When pushed to reveal why the medical establishment and research centers were all against Laetrile, Moss mentions the power and clout of Big Pharma and says no more.

We were happy to learn that this courageous whistle-blower has written 15 books on cancer research and treatment including Doctored Results which is a tie-in with Second Opinion. 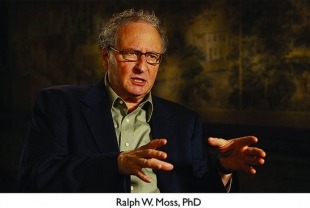 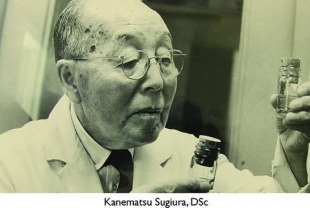 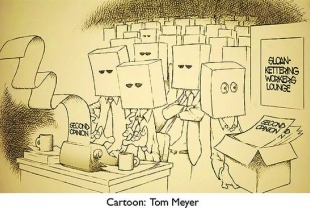