"Well, hello, handsome" is the affectionate phrase Amy Dunne (Rosamund Pike) has used to greet her husband Nick (Ben Affleck) since they met in New York City. Blonde and brainy, she was living off the trust fund established after her parents wrote the "Amazing Amy" series of books about her childhood, achieving both fame and fortune. She and Nick hit it off immediately and we are witness to scenes of their romantic and quirky relationship.

But five years later, it's clear that the halcyon days of their marriage are long gone. Nick lost his New York job and they moved to Missouri to look after his sick mother. Amy invested some of her trust fund money to buy him a bar that he runs with twin sister Margo (Carrie Coon) who is his greatest supporter — even in hard times. Nick spends a lot of time at the bar, and Amy is exorcising her demons, disappointments, and suspicions in her diary.

On the day of their anniversary, Nick comes home and discovers that Amy has disappeared. The detective assigned to the case, Rhonda Boney (Kim Dickens), a meticulous woman who has a gift for reading crime scenes, is convinced that there has been some foul play in the Dunne's kitchen. From the beginning, Nick claims that he had nothing to do with his wife's disappearance. When Amy's parents arrive in town to spearhead a widespread local search to find their exceptional daughter, Nick is overshadowed by their fame and Amy's popularity. He proves to not be very good at managing his public appearances.

It is very gratifying to watch the many ways in which director David Fincher makes the most of the thematic riches of Gillian Flynn's 2012 New York Times bestselling novel. First there is the laser-sharp presentation of marriage gone sour and the lies and hatred which consume both Amy and Nick as they find fresh ways of tormenting each other.

Second, there is this psychological thriller's portrait of our trash-obsessed culture which laps up all the sleazy details of crime sagas. This theme comes through loud and clear in harangues against Nick coming from Ellen Abbott (Missi Pyle), a cable celebrity whose attacks on male domination and domestic violence are unrelenting. Third is Fincher's continuing exploration of the violence that hides out in the quiet corners of contemporary life in America.

Fincher's masterful direction and Gilliam Flynn's viperish screenplay make this thriller quite memorable. We cannot recall ever seeing a drama with as many twists and turns as Gone Girl. Four performances stand out: Rosamund Pike vividly demonstrates her versatility as Amy; Ben Affleck hits the jackpot with his nuanced depiction of Nick; and Kim Dickens and Carrie Coons both turn in excellent portraits as the local detective on the case and as Nick's twin sister. 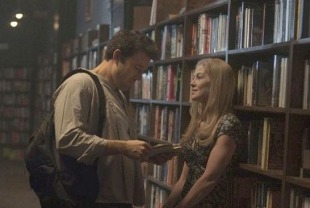 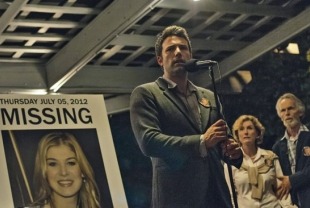 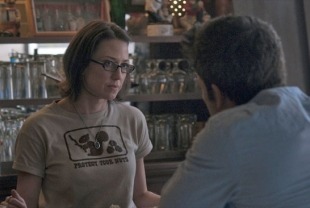 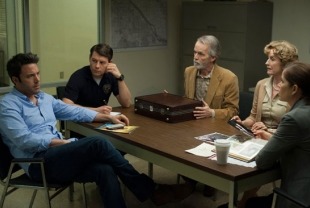