The Year of Living Dangerously

Directed by Peter Weir
A suspenseful, stylish drama about a journalist and the local man who helps him in Indonesia during the last year of Sukarno's reign.

Many of us who have lived exclusively in the Western world have yet to come to grips with the ambiguities and complexities of non-Western cultures. We often think of them as a single alien world, a block of undifferentiated masses.

Guy Hamilton (Mel Gibson), an Australian journalist, arrives in Jakarta, Indonesia, in 1965 with just such attitudes. His experiences during "The Year of Living Dangerously" (a description of 1965 given by the late President Sukarno) shatter that perception.

Sukarno's regime is on it last legs. Western journalists have flocked to the capital to assess the political situation. Seeing in Guy a vulnerability and sensitivity lacking in the other foreign correspondents, Billy Kwan (Linda Hunt), a dwarfish Eurasian cameraman, takes the newcomer under his wings. He explains the need for good contacts and how to sniff out a lively story.

Billy introduces Guy to the exotic culture of Indonesia while demonstrating his collection of shadow puppets. After attending one of Sukarno's lavish audiences for the press and later touring the city's slums, the journalist realizes the sharp gap between the ruling elite and the starving masses. For Billy, Jakarta is "Toytown and a City of Fear." Knowing that Guy is anxious to make his mark, he helps the ambitious newcomer beat out his competitors with a hard-to-get interview with the leader of the Communist party.

Billy then orchestrates a meeting with Jill Bryant (Sigourney Weaver), an attractive English woman connected with the British Embassy. From the first moment he sees her emerging confidently from a swimming pool at a posh club frequented by Westerners, Guy is smitten by her sensual blend of beauty, mystery, and aplomb.

The Year of Living Dangerously is based on a 1978 novel by C. J. Koch. It is directed by Peter Weir whose works include The Truman Show, The Dead Poets Society, Witness, Gallipoli, Picnic at Hanging Rock, and The Last Wave. This gifted Australian director seems drawn to the sparks that ignite when divergent cultures rub against each other. As writer Octavio Paz has observed: "What sets worlds in motion is the interplay of differences, their attractions and repulsions. Life is plurality." Weir's movies are open-ended, stylish dramas that engage our senses, psyche, and wonder.

The screenplay by David Williamson, Peter Weir, and C. J. Koch builds the suspense as we are caught up in the showdown between Sukarno's government, Communist revolutionaries, and rightist extremists. The romance between Guy and Jill is juxtaposed with Billy's increasing desperation as he learns firsthand of the government's inability to meet the needs of its people. In the end, just as Sukarno fails Billy, Guy does not live up to his friend's high standards of morality.

The ambiguous finale of The Year of Living Dangerously forces the viewer to sort out the meanings of the story in bits and pieces. The film's overall impact, however, rests firmly on the intense and remarkable portrait of Billy Kwan by an American woman, Linda Hunt. She received an Academy Award for Best Supporting Actress. 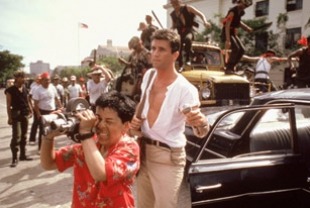