Monk With a Camera

Directed by Guido Santi, Tina Mascara
The life and work of a Western abbot in a Tibetan monastery in India who serves as a bridge-builder.

Nicholas Vreeland grew up as the cultured and privileged son of an U.N. diplomat and the grandson of the legendary Vogue magazine editor Diana Vreeland. Born in Switzerland, he was educated in Europe, North Africa, and the United States. During the late 1960s and early 1970s, Vreeland pursued a career in photography working as an assistant to Irving Penn and Richard Avedon, two famous masters of the art.

In 1972, he began meditating and decided to leave behind his glamorous life in the world of attachments. In New York, Vreeland met Khylongla Rato Rinpoche, founder of the Tibet Center in New York City, who became his guru. In 1985, he became a monk, moved to India, had his head shaved, and spent the next 14 years studying Tibetan Buddhism. His Holiness the Dali Lama sent him to a Tibetan refugee settlement just across the Indian border. Eventually, he took charge of building the Rato monastery there.

Guido Santi and Tina Mascara direct this engaging portrait of a gifted monk whose life and work as a bridge-builder enables us to see clearly the challenges facing Tibetan Buddhism in the Western world. The documentary also ponders the personal struggle Vreeland has reconciling his passion for photography with his spiritual life and his Buddhist understandings of attachment and impermanence. At one point he gave up his cameras entirely. But ironically, when the 2008 economic crash stopped the funds coming in for the monastery construction, he traveled around the world raising nearly a half million dollars through the sales of his photographs. His Holiness the Dali Lama appointed Vreeland as the Abbot of the Rato monastery, the first westerner to serve in that role in nearly three millennia of Tibetan Buddhist history.

Our favorite moments in this documentary involve Vreeland's courtesy to his shoes by keeping them polished, the encouragement given this monk by his father and brother, a scene of monks rescuing an ant who steps in their path, the joy given to Vreeland's guru by a toy parrot, and the laughter of His Holiness the Dalai Lama when in the midst of very sober rituals. Taken together, these magical moments present Tibetan Buddhism in a very positive light.

Special features on the DVD include deleted scenes; Khyongla Rinpoche Returns to Tibet (1993, 38 min.) and a podcast interview with Nicky Vreeland. 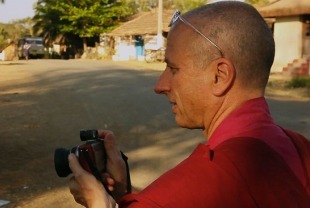 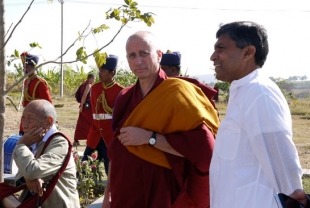 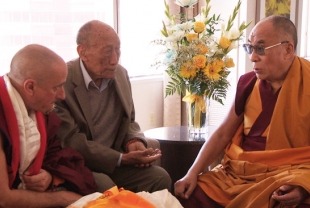 Books by His Holiness the Dalai Lama edited by Nicholas Vreeland